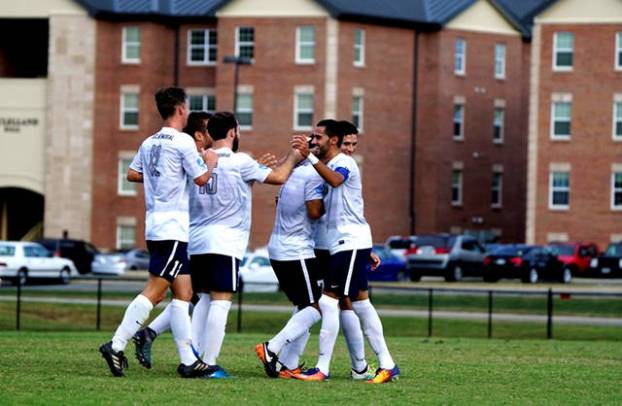 Victor Peres also added a goal and assist for his second career multi-point effort. The points were the first for Peres, who led the 2016 team with nine goals and 23 points, since returning from a four-game absence.

Da Silva accounted for both of Lincoln Memorial’s goals in the first half. He opened the scoring barrage just 2:11 into the match on a feed from Andres Pratto and added his second goal in the 37th minute on a long strike from well outside the box.

He completed his hat trick just 1:20 into the second half as he converted on another quick pass into the box-this time from George Cant. The hat trick gives da Silva nine goals on the season, which ties Carson-Newman’s Tobias Solem Karlsen for the SAC lead. He overtook the SAC points lead on the play and added to that total when he assisted on Felipe Machado’s goal to put the Railsplitters up 4-0.

Peres headed home a Miguel Reis cross in the 79th minute, and Henrique Rezek capped off the scoring with a penalty kick goal in the 87th minute.

Lincoln Memorial outshot Newberry 16-9 and held a 9-6 edge in shots on goal.

Caleb Cothrin and Caio Bergamo combined for the team’s fourth shutout of the season. Cothrin started his ninth straight game and made five saves before being subbed out after the Railsplitters went up 4-0.

Bergamo, who started the team’s season opener but hadn’t played since, made his first career save in the 81st minute as he made a diving catch to preserve the shutout.

– The 6-0 win surpassed 2015’s 5-0 victory as Lincoln Memorial’s largest victory over the Wolves.

The Railsplitters travel to Dahlonega, Georgia for a nonconference matchup with the North Georgia Nighthawks Wednesday at 4 p.m.

Greent plans to create his own UK legacy