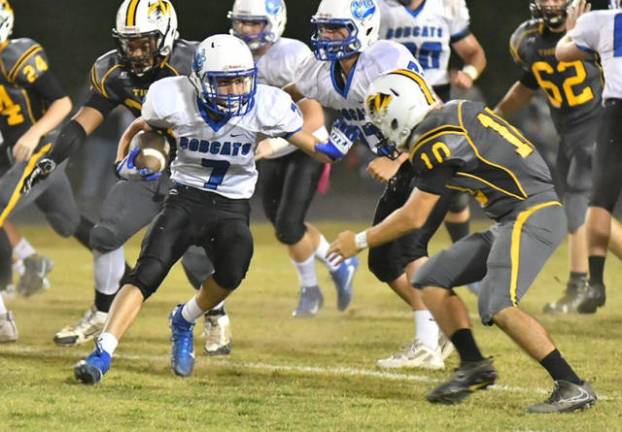 Chandler Mink returns a kickoff during Bell County’s game against Clay County on Friday. The Bobcats picked up their fifth victory of the season with a 41-21 victory over the Tigers.

Bell County picked up their fifth win of the year on Friday when the Bobcats handed Clay County a 41-21 defeat. The victory eclipses Bell County’s win total from a year ago with three games remaining in the regular season.

Sophomore running back Colby Frazier continued to impress against the Tigers. He picked up 208 yards and four touchdowns on 19 carries. It marks the fifth consecutive game the sophomore has rushed for at least 100 yards. It’s his third game of the year that he has rushed for more than 200 yards in a game.

Issac Collett went 4-for-8 for 92 yards on the night. Jason Jones led the receiving corps with 47 yards on two receptions. Frazier hauled in 36 yards on his solo catch. Wombles scored a touchdown on his 14-yard catch.

Clay County had success both running and passing the ball on Friday. Workhorse running back Tanner Revis carried the ball 32 times for 188 yards and two touchdowns. John Gilbert finished with 57 yards on nine carries.

Gilbert also completed 10 passes for 138 yards and one touchdown. Chance Smith hauled in a team-high seven receptions for 89 yards and a touchdown. Tanner Jones had two catches for 37 yards.

Bell County jumped out to a 7-0 lead after Collett connected with Wombles on a 14-yard strike with 9:52 remaining in the first.

Clay County tied the game with 4:32 left in the opening quarter after Smith caught a 21-yard touchdown pass from Gilbert. The Spencer Dubbles extra point tied the game at 7-7.

A 3-yard touchdown run by Frazier gave the Bobcats the lead with only seven seconds remaining in the first. The failed extra point brought the score to 13-7 at the end of one.

Bell scored the only touchdown of the second quarter when Frazier broke free on a 28-yard run. The sophomore converted the two-point attempt to increase the Bobcat lead to 21-7 with 6:33 remaining in the half.

With 45 seconds left in the quarter, Frazier scored on a 12-yard run. The two-point conversion gave Bell County a 29-21 lead at the end of the third.

The Bobcats put the game away in the fourth. Wombles broke free on an 80-yard touchdown run with 9:25 left in the game to increase the lead to 35-21. Frazier scored with 1:15 remaining to secure the 20-point victory.

Lynn Camp ended a four-year drought against Pineville in strong fashion on Friday. The Wildcats — whose last victory over... read more