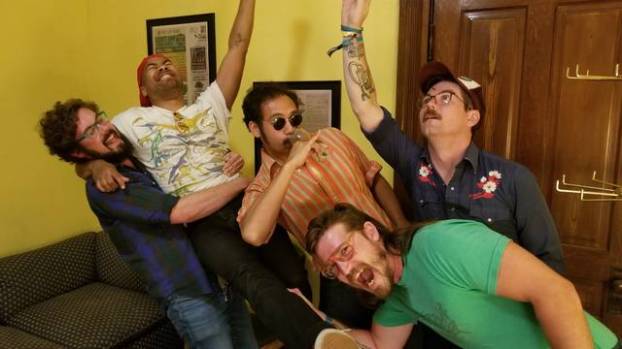 Whiskey Shivers having a good time in the green room before their set.

The third consecutive Levitt AMP Middlesboro Music Concert Series has come to a close, and Whiskey Shivers was the last performer on Thursday night to end the event.

Frontman Bobby Fitzgerald, barefoot with smiles and comments on how nice it was for Levitt organizers to provide a complimentary bottle of whiskey for the band in the green room.

When asked what “Whiskey Shivers” means, Fitzgerald smiles and gives a coy reply, meant to make fun of musicians who may think too highly of themselves and their work.

“It’s whatever it means to you. It’s a piece of art to be interpreted through the lens of the viewer…does it mean party — maybe?”

Fitzgerald found fellow band member, vocalist and bassist Andrew VanVoorhees through craigslist.com, and the rest of the band came together from there.

The band is known for their more fun-loving, irreverent style and when it comes to their sense of humor, they all remark that they “had no choice” in the matter, it just happened that way naturally and that their image was in no way thought out beforehand or calculated.

VanVoorhees calls it “the least forced thing ever,” and something they embrace.

Bluegrass is often a very traditional genre of music, and Whiskey Shivers never intended to set out to be a bluegrass band in any strict or traditional way.

Fitzgerald stated that most of the band wasn’t even all that knowledgeable on the genre. What attracted the band to that style of music was the instrumentation. They appreciated the acoustic sound built from there. They affectionately dub their style as “trash grass.”

As far as music inspirations, the band couldn’t pin any set genre or musicians down. Everything from punk rock, hip-hop and “embarrassing hair metal.”

Fitzgerald describes the songwriting process for the band as straightforward and literal. Since there are multiple songwriters in the band, they end up with various perspectives and influences from daily life and daily struggles.

Fitzgerald describes the connection the band makes with an audience as “the best part of the day,” and the rest of the band echoes in agreement, saying that if the crowd can be won for only five minutes — it makes everything worth it.