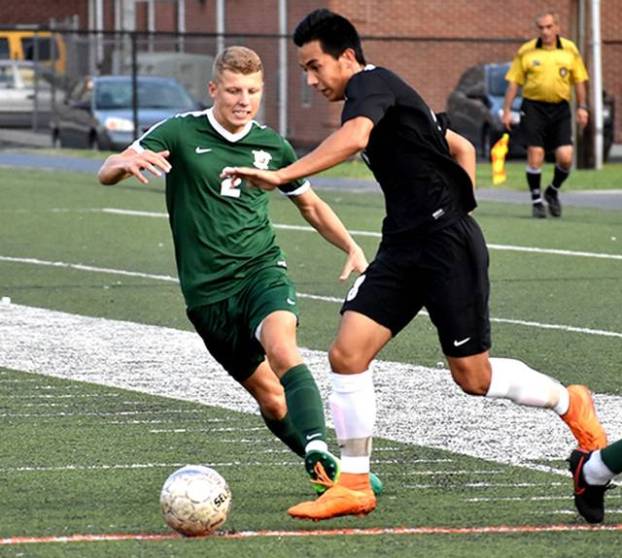 Edwin Garcia’s goal in the 89th minute helped Union escape with the 1-0 Appalachian Athletic Conference (AAC) victory over Bluefield on Wednesday. The Bulldogs improve to 6-4-1 overall and 4-1 in the AAC.

BLUEFIELD, W.Va. — It is usually a battle when Union College and Bluefield meet on the pitch, and Wednesday’s affair was no different.

In what turned into a physical battle, the Bulldogs collected an Edwin Garcia goal in the 89th minute to escape with the 1-0 Appalachian Athletic Conference (AAC) victory.

Tight contests between the Bulldogs and Rams are nothing new as seven of the 10 meetings since 2008 have been one-goal outcomes with a tie mixed in for good measure. Since 2005, Union is 9-2-1 against Bluefield, but only one of those 12 matches was decided by more than two goals.

Teams were physical throughout as they combined for 28 fouls, 11 yellow cards, and four red cards.

After a scoreless first half, the tight play continued throughout the second. In the 56th minute, the red cards came out with Union receiving one and Bluefield two, meaning the Bulldogs played with a one-man advantage the rest of the game.

Union turned up the offensive pressure and started firing more shots. Goalkeeper Sven Kleinhans kept the Rams in the game, making four saves. However, the scoreless deadlock was busted when Garcia scored his first goal of the year with 1:44 remaining in the game.

Cameron McConnachie stood tall in goal for Union, recording six saves in collecting the shutout win. Luke Hitchman had two shots on goal, while Duarte Rebelo and Steve Beilby each had a shot on goal as well as three total shots.

The final red card came after time expired as a Bluefield player was flagged.

Union takes on Reinhardt in another conference tilt on Saturday at 7 p.m.

LEXINGTON (KT) — When it comes to social media, Kentucky coach John Calipari has more than one eye getting the... read more