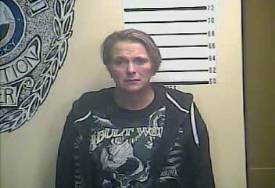 Burchett stated in a police citation that Hensley, 47, of Clarksville, Tennessee, refused to stop during emergency lights and sirens which led to a pursuit through the city of Middlesboro. During the pursuit, Hensley drove a vehicle through an airport security gate back side fence, causing severe damage. Hensley also enter a restricted area of the airport marked for no unauthorized vehicles.

Burchett said the car Hensley was driving, a 1999 Mercedes Benz, was reported stolen. After the vehicular pursuit, Hensley exited the vehicle and began to flee on foot, leading to an arrest. During the arrest, Hensley pulled away from the officers.

* Joshua Maggard, 30, of Crab Orchard, was arrested on Oct. 5 on a charge of first-degree possession of a controlled substance, possession of drug paraphernalia and was served three bench warrants.

According to the police citation, Maggard had a tied-off bag with a white substance inside found in his front pocket with a piece of blue straw.

* Johnny Lankford, 42, of Arjay, was arrested by Pineville Police Department Officer Justin Taylor on Oct. 6 on a charge of first-degree possession of a controlled substance.