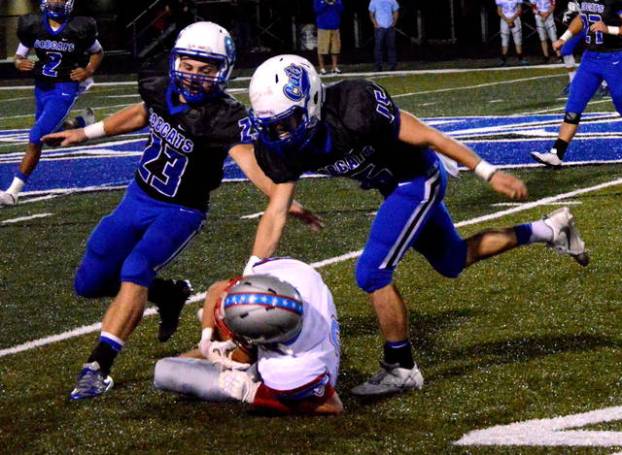 Colby Frazier and Tanner Asher bring down a Casey County runner during last week’s game. On Friday, Bell County will try to get back on track when they travel to Clay County.

Bell County took a step backward last week in a 49-28 loss to No. 7 Casey County. A late-game rally by the Rebels allowed them to pull away for a double-digit victory in what was a tie game with seven minutes remaining in regulation.

With the disappointing loss behind them, the Bobcats turn their focus to Friday where they will travel to Clay County to compete against the Tigers. If Bell County wins, they will eclipse their win total from a year ago with three regular season games still on the schedule.

It has been half a decade since Bell and Clay County locked horns. In 2012, the Bobcats eased by the Tigers 39-0. It was an outcome very similar to 2011, where Bell County defeated Clay 41-0.

While the Bobcats are searching for their fifth victory of the year, the Tigers are hoping to pick up their first win since defeating Middlesboro 30-29 on Sept. 1.

A team with a run-first, throw if you have to mentality, Clay County has not been able to find their stride this season. The team has only one win on the year with a 14-13 loss to West Jessamine being as close as they’ve come to tasting victory the rest of the season.

Senior running back Tanner Revis has been at the forefront of the Tiger offense. He has racked up a team-high 822 yards and eight touchdowns. He is averaging 137 yards per game and 7 yards per carry.

Clay County also has a trio of backs to use behind Revis. Kyle Pennington has rushed for 271 yards, and Chandler Hibbard has found the end zone once while tallying 268 yards on the year.

Quarterback John Gilbert has 254 rushing yards and one touchdown this season while averaging 42 yards per game. In the passing attack, Gilbert has logged in 240 yards and three touchdowns on 34 percent passing. He also has four interception this season.

Defensively, the Tigers have allowed 1,229 yards rushing and 851 yards passing. The leading tackler for Clay is Trenton Saylor with 23 on the year. Jacob Deaton and Elijah Durham have 19 and 18 tackles, respectively.

Pineville and Lynn Camp have a storied history with each other. For the past eight seasons, the two teams have... read more