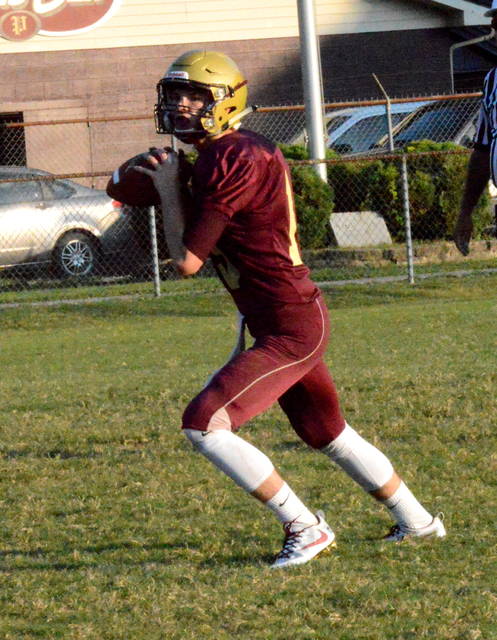 Garland Ellis drops back to pass during a junior varisty game against Williamsburg earlier in the year. Pineville will open their district slate on Friday when they host Lynn Camp. Earlier in the year, the Wildcats defeated the Mountain Lions in the SEKC Gridorama.

Pineville and Lynn Camp have a storied history with each other. For the past eight seasons, the two teams have squared off against each other with the odds lying in the Mountain Lions favor. On Friday, the two teams will meet for the ninth straight time as Pineville opens their district schedule against the Wildcats.

Over the course of the past eight seasons, the Lions hold a 6-2 series lead over Lynn Camp. They are 4-1 against the Wildcats over the past five season outscoring Lynn Camp 172-63. Last year, Pineville was able to walk away with a 35-28 victory on the road.

The last time the Wildcats defeated the Mountain Lions was in 2012 — when Lynn Camp came to Pineville and defeated the Lions 23-14.

Fans got to see a preview of this game during the SEKC Gridorama earlier in the year. In what was a muddy game, the Wildcats defeated Pineville 12-6. Big plays allowed Lynn Camp to earn the victory in the scrimmage.

With that said, the Pineville team that Lynn Camp saw during the SEKC is not the same team that they will see on Friday. Since the scrimmage, Garland Ellis has returned from injury to take over at quarterback, and Reese Capps has moved into the role of wide out.

Friday’s game is shaping up to be similar to last season’s matchup. At that time, Pineville was boasting a 2-4 record while Lynn Camp was 6-1 and getting votes in the AP polls. The Wildcats’ six-game winning streak ended that day and they never recovered — losing all of their remaining games.

Both teams will be looking to start the season 1-0 in district play on Friday..

It is hard to get a read on just how good Lynn Camp’s 4-2 record is this season. The four teams the Wildcats have defeated are a combined 7-18 on the year. Clinton County has the best record of the Lynn Camp victories going 4-2 on the year.

The Wildcats two losses came against Knott County Central and Floyd Central. Those two teams are a combined 7-6 on the season.

Brenton Medlin and Dalton Cook are the two players to look for on offense. The duo combine for nearly 60 percent of the carries in Lynn Camp’s run heavy offense that has amassed 1,604 yards rushing.

Cook leads the way on the ground with 521 yards and seven touchdowns. The junior back averages 104 yards rushing per game. Medlin has tallied 474 yards and a team-high nine touchdowns while averaging 79 yards per game.

Quarterback Eric Mitchell has tallied 254 yards and four touchdowns through the air on 45 percent passing. He also has three rushing touchdowns to go along with his 147 yards on the ground.

While the passing game is not a major component of the Lynn Camp offense, Marcus Hollins has done pretty well for himself grabbing 107 yards and a touchdown on six receptions. Chase Brown, Cook and Domanick Cook also have receiving touchdowns on the year.

The Wildcat defense has found some issues stopping the run on the year allowing 996 yards on the ground. One of the leaders of that group is Dalton Cook, who has a team-high 42 tackles on the year.

Seth Baker and Tracy Fee are also among the top tacklers for Lynn Camp with 37 and 32, respectively. Brown has proven to be effective in the Lynn Camp secondary with three interceptions.

Knox Central scored two goals in the first half of Tuesday’s game against Bell County en route to a 5-0... read more