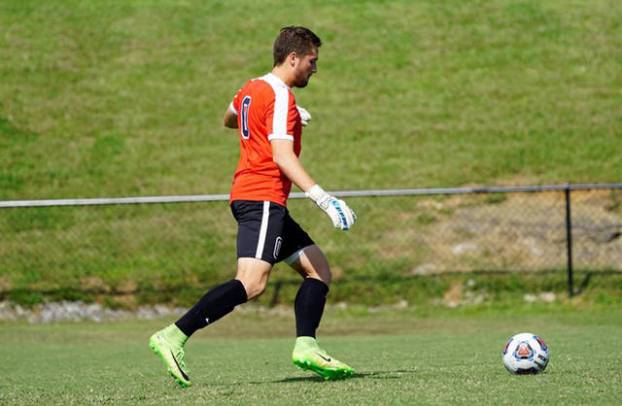 Caleb Cothrin made a season-low two saves and tied a season-high with three goals allowed during Lincoln Memorial’s 3-0 loss to Carson-Newman on Wednesday.

JEFFERSON CITY, Tenn. — Tobias Solem Karlsen scored a hat trick for No. 25 Carson-Newman, while the Eagles (8-1-1, 5-0-1 SAC) pitched a shutout for the seventh straight game in a 3-0 victory over Lincoln Memorial Wednesday evening. The Eagles also extended their win streak to six games.

The Railsplitters (5-2-2, 1-2-2 SAC) dropped their second straight match and fell for the first time in regulation. The loss snapped a 12-game stretch dating back to last season in which the team did not lose in regulation.

The Railsplitter offense was stymied for the third straight road SAC match and was outshot 16-11. Solem Karlsen led all players with seven shots and scored on all three of his attempts on goal.

Lincoln Memorial has yet to score through three SAC road matches.

Solem Karlsen put Carson-Newman ahead in the 38th minute. He converted on a Jonny Le Quesne pass that led to a breakaway. The sophomore added to that lead on an 18-yard strike in the 56th minute. He then capped off the hat trick and took over the SAC lead in goals after converting on a penalty kick in the 84th minute.

– The Railsplitters fall to 3-1 against ranked opponents. They previously defeated No. 11 Yong Harris, No. 12 Lees-McRae and No. 5 Lenoir-Rhyne.

– Solem Karlsen’s hat trick was his second of the season. He also netted three goals against Clayton State.

– Lincoln Memorial was shut out in consecutive games for the first time since 2014.

The Railsplitters return home Saturday for a SAC matchup with Newberry at 3:30 p.m.

HARROGATE, Tenn. — The Lincoln Memorial University men’s basketball team has announced the schedule for the upcoming 2017-18 season, which... read more