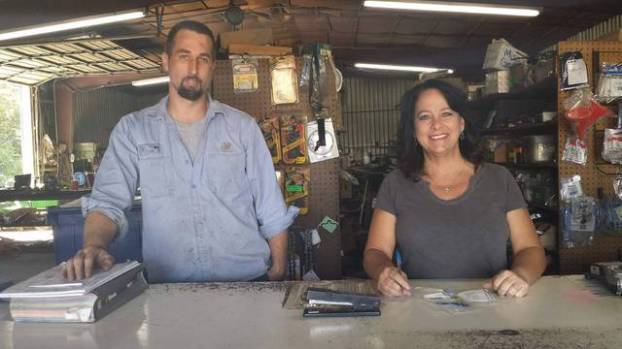 The owner, Buddy Yeary, has been in the repairment business for over 45 years, and decided to open his current shop in 1978. It quickly grew into a household name among the community, and even several surrounding areas, as customers gained a special connection to Buddy and began coming in more and more regularly.

However, due to an unfortunate change in Yeary’s physical health, the shop was put on hold for six months while he and his family focused on his health as their number one priority.

After six months, his daughter, Marcia Yeary, decided it was time for the shop to open back up to all of its loyal customers. Seeing as Buddy is still in critical condition, Marcia took on the responsibility of operating the shop herself for the time being.

Both Marcia and her older sister, Melissa Yeary, grew up around the repairment business and began working at shops similar to this one from an exceptionally young age. He made sure to stress to them that he didn’t believe there was anything they couldn’t do, and that being a female should in no way alter their dreams.

Buddy raised them both to have a wonderful work ethic so that they would become hard working members of society later on, but make no mistake, he has still always managed to maintain an equal balance of love and compassion in his family life as well.

That same closeness he has always strived for among his family has been carried out among his grandchildren as well. His grandson, Tipton Yeary, 16, proves this by taking Buddy out for a ride each day in the car he provided the teen.

Both his family and his customers continually rave about Buddy’s good-hearted nature and moral ethics. He has always went above and beyond to provide each customer who walked through the door of his shop with the best customer service experience he could offer. Sometimes, this even included making his own parts when the ones wanted had been discontinued, or providing at home pick-up and delivery.

“They’re great people to do business with. They’ve been in the business for years and they’ve helped my family’s business a lot and, in return, we help them whenever we can as well,” said loyal customer Austin Barnett, owner of Shillala Garage located on the outskirts of Middlesboro.

Marcia has made it her goal to carry on the shop the same way her father did, and continue to keep an honest business, complete with low prices and customer appreciation.

“What we’re trying to do here is just carry on with what daddy started so many years ago. We just want to give our customers the very best service we can,” said Marcia.

Helping her operate the store is Eric Estep, a long time employee of Buddy’s who Marcia often refers to as “genius material” when it comes to knowing how to run the shop.

“We just feel very fortunate to have him because, first of all, he worked for daddy, so he has learned a lot about where things are and what they do from him, so it almost makes me feel like a part of him is still down here,” said Marcia.

While she loves running the shop, Marcia claims she never saw herself doing this and, although she feels it is where she belongs, it can sometimes become a bit overwhelming and has caused her to have an even greater appreciation of her father and the work he has put in his entire life to raise her and her sister.

However, when things get difficult Marcia never has to look too far to find a friendly face, as she is surrounded by other businesses within her family. In fact, when Buddy decided to open the shop he didn’t only buy the one spot, but the entire block.

“I can’t stress enough how much I appreciate the support from my family and daddy’s loyal customers,” said Marcia. “It’s truly amazing.”

A Middlesboro woman was arrested on two counts of endangering the welfare of minors on Sept. 30, among other charges.... read more