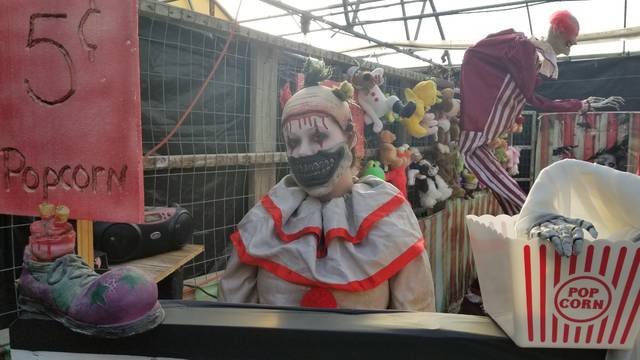 Come Halloween time, haunted house attractions or “Haunts” as they are affectionately dubbed, pop up all over America ready to give thrill seekers and lovers of all things spooky a real jolt of fear and fright.

While Halloween deals with macabre subject matter such as death, monsters and even real-life horrors, it is the second most commercial holiday in America. It is safe to say people love Halloween and that there is a thirst for holiday themed events and attractions to attend once October rolls around.

It just so happens, the Tri-State area features its own Haunt in the form of the Gose Haunted House in New Tazewell.

For four years running, Carolyn and Jim Gose, with the help of their staff, transform the greenhouse of their business into a haunted attraction every Friday and Saturday starting at the end of September all the way up until Halloween night.

The 9,200 square-foot greenhouse is transformed into a maze of various horror themed scenarios and settings such as a slaughter house, a hospital, a clown room, a graveyard and more.

Carolyn Gose has always been a fan of Halloween, and got the idea to do a haunted attraction just to see how it would do, and because there wasn’t any other local haunts in the area.

All of the characters, props and sets found in the house are designed and built by the Goses with the help of family employees Raychel Johnson (who also acts as a performer in the Haunt) and Jackie Bolden. Local high school kids also help with the building of the Haunt every year and also make up the performers who are tasked with proving the scares for intrepid visitors.

The goal of the attraction is to legitimately scare the patrons. It was not made for the intention of being family friendly, and Carolyn advises parents that children under the age of 13 may have a hard time with the Haunt.

The community has responded positively to the Gose Haunted House over the past four years. In regards to community appreciation, Carolyn says “It’s growing. We’re getting more people from out of the area now…now the kids are sharing it a lot more. We’re getting more feeding every year. This year is better than every year so far.”

Despite the Gose Haunted House being a modest family operation, they do not rest on their laurels. Every year they come up with new scenes and scenarios to add to the Haunt to keep guests on their toes and to please returning fans who wouldn’t want to see the same thing every year. For this year, a new barnyard scene has been added.

The Gose Haunted House is open now and is located at 1044 Highway 33 in New Tazewell. Admission is $6 and the Haunt opens at dusk and runs until 10 a.m.

Some of the information in this article was found at http://www.americahaunts.com/ah/facts/.