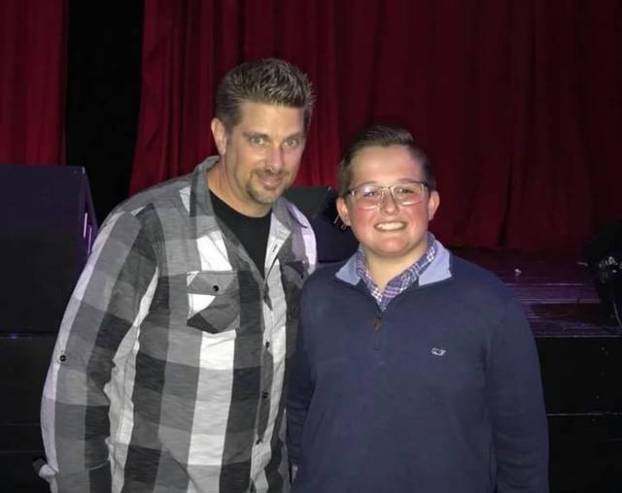 Treece and Brian O’ Brian found time to pose for a photo during the special viewing party held at the Bell Theater in Pineville.

Local boy on ‘Who Wants to be a Millionaire’

Local boy genius Bub Treece was in for a shock when his exceptional ACT scores led to the experience of a lifetime, providing him with the opportunity to compete on the national game show ‘Who Wants to Be A Millionaire?’.

Treece, an eighth-grader at Bell County Middle School, won a whopping $20 thousand while participating in the well-known game show after receiving exceptional ACT scores back at such a young age last year.

The Gifted and Talented student received a 28 overall on this pre-college assessment intended for high school juniors, with a stunning 34 in the English portion. A program called Duke TIP quickly picked up on his impressive scores and provided Treece with the opportunity to submit his information in for the casting pool for Who Wants to Be A Millionaire.

While not expecting any real results to come from it, Treece decided to submit his information anyway just in case. Soon after, he was contacted by the show and asked for several interviews. While this was a clear indicator of the show’s fascination with the intellectual, Treece claims he still had no idea he would actually be selected for a spot on the show.

“While I was obviously very excited, I was mostly in complete shock at the opportunity when I first found out,” said Treece.

Upon being notified of the thrilling news, Treece then had two months to prepare before flying out in August to begin the filming process. He says the experience was truly mesmerizing, as he never pictured himself on a national game show among the top intellectual young students in the country.

Unlike many kids his age, Treece has a good head on his shoulders when it comes to financial planning and plans to save the money he earned for college as well as a “rainy day fund”, rather than spending it recklessly.

Spending a significant amount of time in a green room without phones and other electronic devices allowed Treece and the other contestants to truly get to know one another and make bonds that could very well last a lifetime. Treece continues to keep in contact with some of his fellow contestants, as they shared such a wonderful opportunity together.

Following his arrival back to his home town of Pineville, Treece says he was astonished by the remarkable amount of support shown to him throughout the community, with much of the community eager to attend the viewing party on Monday, despite it being postponed to 1:30 am.

“The support has been absolutely incredible. It’s truly amazing how many people have shared posts, attended the viewing party and watched the show. It means so much to me to see the support I have from the community,” said Treece.

While the show was originally scheduled to the air at 12:30 pm on Monday, is was rescheduled due to the news being preoccupied by the tragic Mandaley shooting in Las Vegas

Anyone wishing to view the episode Treece appeared on can tune in to WATE on Sunday afternoon at 1:30 for a special re-run of the show.

“It was an awesome experience. The crew and staff of the show were absolutely amazing to my son, as well as all of the other kids participating,” said Bub’s mother, Tiffeny Reece. “We met a lot of nice people out there in August during the filming and our hearts go out to Las Vegas.”

The Kingdom Come Swappin’ Meetin’ and Kentucky Black Bear Festival (#swappinbear) will take place on Oct. 6 and 7 on... read more