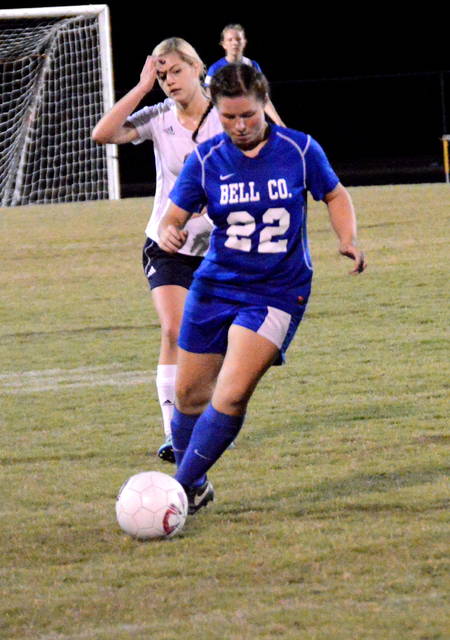 Lexis Rogers pushes the ball up the field during Bell County’s regular season finale against Knox Central on Tuesday. The Lady Cats lost to the Lady Panthers 5-0 to secure fouth place in the district.

Knox Central scored two goals in the first half of Tuesday’s game against Bell County en route to a 5-0 victory over the Lady Cats. The win locks the Lady Panthers into third place in the district while Bell rounds out the district in fourth place.

“They started off sluggish. They grew into the game some, but…the other team was consistently beating us on 50-50 challenges and going to the ball,” said Bell coach Adam Huber. “Really, that was the difference in the game. (Knox Central) was able to get to it, and once they got it they controlled the play. When we got it we were able to turn and attack as well. So, the 50-50 challenges and going to the ball was the difference.”

While the Lady Cats played a defense-first style, the team was able to create some opportunities offensively. Both Lexis Rogers and Kayla Payne had chances late in the game but couldn’t get the shot off.

“We play more at the back than we do up front. We’re trying to contain the other offense and kind of move the ball forward,” said Huber. “We’re trying to do different combinations — through balls, give and go, and some other different combos. Once the girls get some more experience, it’ll come a little more together. They’re getting there. It’s just taking more time.”

Knox Central took a 2-0 lead into halftime after scoring on a penalty kick near the end of the first period. The Lady Panthers had another chance to add a goal before halftime but came away empty handed. Around the 42nd minute, Knox Central had the ball trapped in front of the goal but couldn’t find the back of the net.

The Lady Panther scored their third goal six minutes into the second half to increase the lead to 3-0. Jo Beth Hopper and Emma Callihan ended the game with goals in the 41st and 42nd minutes to secure the five-goal victory.

Bell County now turns their sights to a first round game against Harlan County. The Lady Black Bears have handed the Lady Cats a 5-0 loss and 6-0 loss on the season.

“Harlan County plays, in my opinion, similar to what (Knox Central) plays in terms of style of attack. They’ve got some tall girls, and they’ve got some fast girls,” said Huber. “We have to contain that speed. We need to just control the ball, possess the ball better, and not give it away in poor position. We need to go to the ball.”

Bell County (0-12) will travel to Knox Central on Monday for the district tournament. They will battle Harlan County (9-3) at 6 p.m.