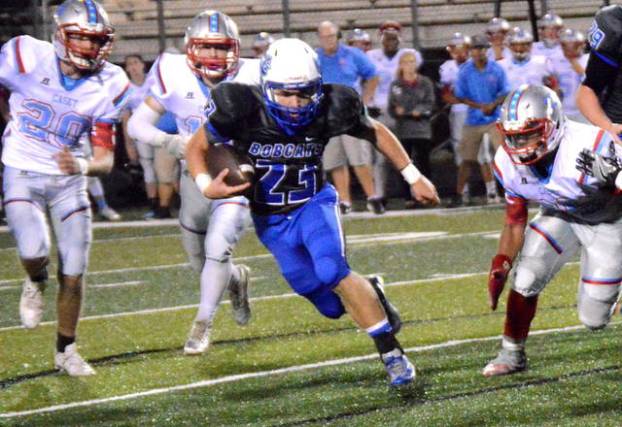 Colby Frazier evades a tackle to score a touchdown against Casey County. The sophomore running back is currently ranked No. 4 in Class 3A and No. 10 in the state in rushing yards.

The year of the running back

Although some teams are searching for their stride this year, the season has quietly become the year of the running back for teams inside Bell County. Bell County’s Colby Frazier, Middlesboro’s Michael Carroll and Pineville’s Lawrence Simpson are each ranked inside the top 20 in their respective classes.

Frazier leads the group of talented backs ranking No. 4 in Class 3A and No. 10 in the state in rushing yards per game. Carroll is ranked No. 13 in Class 2A, and Simpson ranks in at No. 15 in Class 1A.

Frazier —a sophomore who missed his freshman season after suffering an injury against Mercer County a year ago —has been a staple in Bell County’s rushing attack all year. He started the year off with 82 yards and two touchdowns against Middlesboro before gaining only 2 yards against Letcher County Central.

The limited amount of touches must have struck a nerve because Frazier has been on fire since that second game. Across the next four games, the sophomore has not rushed for less than 100 yards. His two best games of the year were against Pike County Central and McCreary Central.

Recently, Frazier picked up 176 yards and three touchdowns on 12 carries against Casey County. He is currently averaging 152 yards per game for the Bobcats.

Carroll’s journey to the top 20 has been an impressive one. The Middlesboro senior is making his debut this season after a series of injuries put him on the shelf each of the last three years.

Carroll is averaging 87 yards per game and only has 32 carries on the year. He has tallied 521 yards and six touchdowns across six games. Stats for the Lexington Christian game have not been entered into KHSAA.

There has been a build up to Carroll’s success throughout the season. After starting the year without a carry against Bell County, the senior only tallied 34 yards on four carries against Claiborne the next week.

Over the next two weeks, Carroll’s carries increased to five as he rushed for 31 yards against Clay County and 52 yards against Harlan. He had his breakout game against Pineville on Sept. 15 — when the senior racked up 302 yards and five touchdowns on 12 carries.

Carroll was on track to have another impressive game against South Laurel when he went down with a leg injury. Up until that point, he had ran for 102 yards and a touchdown on six carries.

Pineville’s Simpson has had a quite year so far, but his efforts are still good enough to place him inside the top 20 in Class 1A. Through six games, the senior has averaged 80 yards per game and five touchdowns. Totals for the Thomas Walker game have not been entered on KHSAA.

An eight-carry, 27-yard game to open the season against Leslie County was followed by an 85-yard game against Jackson County. Simpson was able to tally 48 yards on seven carries against a strong Paris team.

It was a game against Berea that separated Simpson from the rest of the pack. He racked up 236 yards and three touchdowns in that outing. The senior rounded out the next two games with 34 yards against Middlesboro and 47 yards and a touchdown against Cumberland Gap.

It feels like yesterday that Bell County seemed to have a firm grip on a top 10 spot inside of... read more