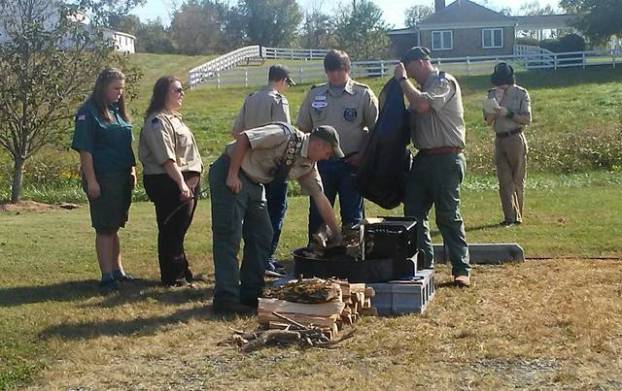 The Boy Scouts of America began a fire in preparation for the flag burning ceremony.

A day of remembrance

A sense of admiration and respect surrounded Wilderness Road State Park as special ceremonies honoring both fallen American soldiers and citizens as well as the preservation of natural land took place at the historical sector over the weekend.

The park’s staff, as well as several community volunteers, spent Saturday morning celebrating two often underrated, but highly impactful and deserving national holidays: National Day of Service & Remembrance and Public Lands Day. In order to put forth the honor the day deserved, several ceremonies and procedures were conducted, including a special service in remembrance of 9/11, a flag retirement ceremony, a tree-planting and even a four mile long trash pickup.

The day’s events began with a warm welcome from Park Naturalist Jesse Henderson, who prompted everyone to prepare for a moment of silence in honor of the many fellow Americans who lost their lives in the horrific tragedy that was 9/11. The silence was quickly followed by a musket shot in respect of their memory, initiated by park volunteers.

Next came the respectful retirement of Old Glory, also known at the American flag, carried out by Boy Scouts of America Troop 394 volunteers.

The flag is regarded by many as one of the greatest symbols of the freedom that comes along with being an American citizen, as well as a reminder of the sacrifices made to achieve such freedom.

“The flag retirement ceremony in particular was very moving. Our flag embodies our core values as Americans and it’s nice to see it given its due respect,” said Henderson. “A flag retirement ceremony is also a good way give back to the community by giving people an opportunity to bring us their old flags. The young men who performed the ceremony did an outstanding job and reminded all of us to never take our flag for granted.”

For many, the thought of Old Glory being transformed into ashes by the flame may seem highly disrespectful, but -when performed correctly — it it actually the greatest symbol of honor possible for a retired flag.

“We are not burning him in anger, but so that he can serve us forever in spirit,” said Boy Scout Mason Glass.

Soon after the ceremony concluded, the Lincoln Memorial University (LMU) Earth Club made their way to the park to perform a tree planting in dedication to the Veterans of foreign wars, after which they volunteered to do a special cleanup around the park.

Events like these serve as clear reminders of the respect and honor deserved by both those in service and the land we live on, but also as a nice indicator of the community’s eagerness to come together and give back.

“We were incredibly honored that the park asked us to be a part of the ceremony. It meant a lot to me, as well as the boys to be able to participate in such a respectable event,” said assistant Boy Scout manager Jimmy Kimberlin.

HARROGATE, Tenn. — Lincoln Memorial University (LMU) recorded its largest enrollment ever, with 4,770 students of record at the fall... read more