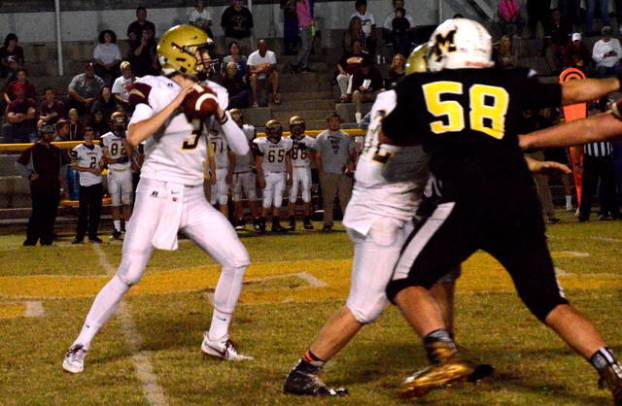 Garland Ellis drops back to pass during a previous game against Middlesboro. Pineville dropped its third loss in a row on Friday when they were defeated by Thomas Walker, 34-14.

The inability to capitalize on red zone opportunities cost Pineville a chance to end a two-game skid. Thomas Walker got off to a quick start en route to a 34-14 victory over the Mountain Lions on Friday.

“We got inside the 10 (yard line) two or three times in the first half and didn’t get any in to score,” said Pineville coach Bart Elam. “Our red zone offense has not been good all year, and it wasn’t tonight. We didn’t stick it in there and that hurts, obviously. Thomas Walker is a very physical team. We just didn’t play well enough to win the game.”

This season has played out much like last season for Pineville, when the Mountain Lions started the year 2-4 before winning four of their last five games. Pineville advanced to the second round of the playoffs last season.

Offensively, the team didn’t make the plays they needed to make. The inability to be consistent in the passing game has allowed teams to stack the box and limit Pineville’s potentially potent rushing attack.

“Teams are able to put, basically, 10 guys on our running game. For us having some young guys upfront, we just can’t handle that,” said Elam. “We’re not able to throw the football right now effectively. We didn’t throw it well tonight. We didn’t block any on the edge.

“We didn’t play well offensively at all, so we have to get back to the drawing board and try to get better. Some of the little things that we are not doing, we’re going to have to change those for the good before we can put more points on the board.”

Defensively, there were times when the team played really well. The Mountain Lions were able to put the Pioneers in some tough situations, but breakdowns allowed Thomas Walker to take advantage of some big plays.

“We are having to switch people around both offensively and defensively every week. We’re having some breakdowns lining up correctly,” said Elam. “We’re still having breakdowns in week six that we were having in week two because of some injuries and because of having to move kids around.

“Having 19 players on the team, we’re having to rearrange some things. It’s definitely frustrating, but we’re not going to give up. We’re going to go back to the drawing board to figure some things out for the district slate.”

Pineville (2-5) begins their district slate on Friday when they host Lynn Camp (4-2).

From start to finish, Lexington Christian made their goal clear — score as many points as possible in regulation. Up... read more