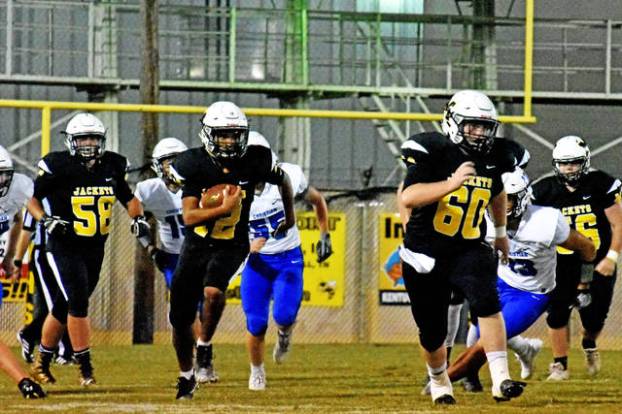 Corey Hariston breaks free for a touchdown during Middlesboro’s game against LCA on Friday. The Jackets lost 76-28 to the Eagles.

From start to finish, Lexington Christian made their goal clear — score as many points as possible in regulation. Up until the final whistle was blown, the Eagles were trying to put points on the board. When the game ended, No. 4 LCA had handed Middlesboro a 76-28 loss.

In defeat, the Yellow Jackets allowed the most points they have in a single game since 2013 — when they lost 77-46 to Pikeville.

The Eagles displayed a balanced offense that showcased why they are ranked No. 4 in the state in Class 2A. They racked up 280 yards rushing and 209 yards passing. Dillon Wheatley finished the game with 83 yards and five touchdowns on 14 carries.

The Middlesboro offense were held to 122 yards rushing and 77 yards passing on the night. One of the biggest issues for the Jackets offensively were turnovers. The team threw two interceptions and coughed up two fumbles.

From the beginning, the game was never in any doubt. LCA scored 28 points in the first quarter before adding 41 in the second. Middlesboro trailed 69-28 heading into halftime.

One of the Jackets biggest plays came from an 85-yard kickoff return for a touchdown by Owen McWilliams.