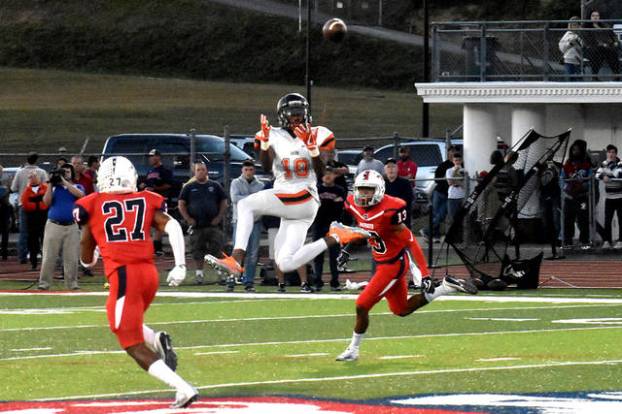 Tyler Toombs hauls in one of his four catches of the day when Union battled Cumberlands on Saturday. Toombs finished the game with a career-high 179 yards receiving and one touchdown.

WILLIAMSBURG, Ky. — The Battle for the Brass Lantern lived up to its name as Union College and Cumberlands fought to the end, concluding with field goal as time expired to give host Cumberlands the 33-30 win on Saturday.

The loss drops Union to 2-3 overall and 0-1 in Mid-South Conference (MSC) Appalachian play, while Cumberlands is now 4-1 overall and 1-0 in conference action.

The Patriots took possession on its own 39 with 47 seconds to play and methodically moved the ball down the field. With 10 seconds remaining, quarterback Josiah Robbins eluded the Union defense, running the ball down to the Union 2-yard line. Cumberlands called a timeout with :02 on the clock, and Joe Rose booted a 19-yard field goal as time expired.

Heading into the fourth, Union had all the momentum. Up 24-21, the Bulldog offense was rolling. Union moved the ball 80 yards in 10 plays to take a 30-21 lead. Jalen Ashby scored on a 2-yard run to make it a nine-point game.

However, the PAT was missed and Cumberlands’ Jaelon Benjamin picked up the loose ball, returning it 100 yards for a 2-point, defensive PAT to make it 30-23 with 9:31 to play.

The Patriots built on that momentum and scored on their next possession. Facing fourth-and-goal at the Union 1, Austin Hatfield punched it in as Cumberlands tied the game at 30-all with 6:46 to play.

The teams then traded punts until Cumberlands took over at its own 37 with 47 seconds to play for the game-winning drive.

Both teams finished with 420 yards in total offense. Cumberlands ran for 239 with Seph Burke’s 76 leading the way. Robbins threw for 181 yards and two scores on 13-of-20 passing.

For Union, Bell finished with 311 yards and two touchdowns on 14-of-29 passing. Tyler Toombs hauled in four passes for a career-high 179 yards and a touchdown. Toombs averaged 44.75 yards per catch. Patterson added three catches for 67 yards and a score.

Union found itself in a hole early, down 14-0 after the first quarter of play. However, the Bulldogs fought back to make it a contest.

With 6:25 left in the second, Bell hooked up with Toombs, who weaved his way through the Patriot secondary and raced to the end zone for an 87-yard scoring play. After the PAT, the game was knotted at 14-all. The junior wide receiver caught the ball only 20 yards from scrimmage and then turned and zigzagged through three defenders en route to the end zone.

Cumberlands answered with a quick scoring drive as Robbins hit Austin Ysidro for a 28-yard touchdown pass to claim a 21-14 lead with 4:34 left.

The Bulldog defense came up with a fumble late in the half, give them the ball on their own 22 with under 30 seconds on the clock. Thanks to a pair of Patriot penalties, Union was able to move the ball down to the Cumberlands 14 with two seconds left. Derek Burgett booted a line drive through the uprights to make it 21-17 Patriots at the half.

Defensively, Justice Bishop led the Bulldogs with 11 total tackles, including a sack and 2.5 tackles for a loss. Jake Averhart added nine tackles, while Triquece Ware followed with seven stops.

Union returns to action on Oct. 14 when it visits Reinhardt for a MSC Appalachian contest. Kickoff is set for 6 p.m.

The inability to capitalize on red zone opportunities cost Pineville a chance to end a two-game skid. Thomas Walker got... read more