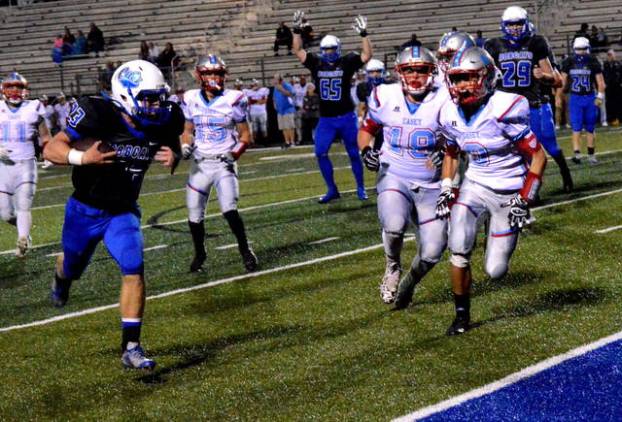 Colby Frazier finds the end zone during Bell County’s game against Casey County on Friday. The sophomore running back ran for 176 yards and three touchdowns on 12 carries.

For 41 minutes, Bell County matched Casey County blow for blow. The remaining seven minutes belonged to the Rebels. After tying the game at 28, the Bobcats allowed three touchdowns down the final stretch en route to a 49-28 defeat.

“We fought hard, I thought, all night long. (Casey County is) a good football team. I knew they were,” said Bell County coach Dudley Hilton. “They got a lot of good things going for them. They got that winning attitude, and I don’t know if we got that yet or not. They brought it to us.

“I thought we had a good crowd. The enthusiasm was there. It was a big time game in my opinion. It was well played on both sides. We just gave up some big plays.”

It was a quick two-play drive that covered 72 yards that seemed to down Bell County’s spirits near the end of the game. The drive ended with a 17-yard touchdown that gave Casey County a 35-28 lead with 7:07 remaining in regulation.

“That was a big series right there. We came down their and tied it up 28-28. Two plays later, they’re back in (the end zone) again,” said Hilton. “Twenty-eight points is enough to win a ball game. We’re just not very good on defense. We’re trying, we’re doing some things, but it’s not all defense.”

The Rebels’ balanced offense kept the Bell defense honest. Austin Campbell threw for 264 yards on 18 completions. Britt Pendleton was the main target in the passing game hauling in 231 yards on 14 receptions.

Casey County racked up 307 yards on the ground. Preston Tucker paced the attack with 144 yards and three touchdown on 21 carries. AJ Glenn ran the ball five times for 36 yards and two touchdowns.

Jason Jones led the receiving corps for the Bobcats. The sophomore wide out finished the night with five catches for 72 yards. He averaged 14.4 yards a catch. Trevor Kidd logged the only receiving touchdown for Bell.

The Bobcat defense came up in a big way on the opening drive of the game. After allowing the Rebels to drive down to the Bell County goal line, the Bobcats forced a fumble and recovered it at the 2-yard line.

Bell couldn’t capitalize and punted the ball away after a quick three-and-out.

Casey put points on the board on the ensuing drive. After taking over at the Bobcat 49, the Rebels drove down to the 27-yard line after a 15-yard pass to Pendleton. Tucker moved the ball down to the Bell 9 after a 21 yard gain.

Tucker capped the drive with a 3-yard touchdown run with 5:04 remaining in the first. The Nick Wilkerson extra point gave the Rebels a 7-0 lead.

Bell answered on their next drive. A 29-yard pass from Collett to Frazier took the Bobcats down to the Casey 48 on the first play. A pass inference on a reverse pass from Antonio Zachery moved the ball down to the Rebel 30.

The Bobcats capped the 10-play drive with a 6-yard touchdown pass from Collett to Kidd. The Jordan Wombles extra point tied the game at 7-7 with 13.7 seconds left in the first.

Casey County regained the lead on the opening drive of the second quarter. The Rebels drove 67 yards in eight plays. A 3-yard touchdown run by Tucker ended the drive. The Wilkerson extra point gave Casey a 14-7 lead with 9:11 remaining in the half.

A quick three-and-out by Bell gave the Rebels another opportunity to score before halftime. A 55-yard halfback pass from Tucker to Pendleton on the first play of the drive moved the ball to the Bobcat 22.

On the next play, Campbell got loose on a 17-yard run to move Casey to the 5-yard line. Two plays later, Campbell scored on a 4-yard run to increase the lead to 21-7 with 6:06 left in the half.

Bell County cut the lead to a touchdown after grabbing an interception near the end of the quarter. A 34-yard pass from Collett to Jones moved the Bobcats into Rebel territory. The Bobcats were able to move down to the Casey 36 before Frazier broke free on a 36-yard touchdown run with 1:11 left in the half.

The Wombles extra point cut the Rebel lead to 21-14 heading into halftime.

Bell County tied the game on the opening drive of the second half. Frazier ran for 46 yards on four plays before scoring on a 10-yard run with 7:54 remaining in the third. The extra point tied the game at 21-21.

The Rebels ate up over five minutes of clock on the ensuing drive before punching it into the end zone. Glenn capped off the 14-play drive with a 3-yard touchdown with 2:38 remaining in the third to give Casey a 28-21 lead.

With a rowdy crowd in their corner, the Bobcats tied the game on their first full drive of the fourth quarter. Bell County went 77 yards in three plays. Frazier found pay dirt on a 65-yard touchdown to tie the game at 28-28 with 7:36 remaining in regulation.

That was the last once of momentum the Bobcats had in the game. It took the Rebels two plays on the ensuing drive to find the end zone. A 55-yard pass from Campbell to Pendleton helped set up a 17-yard touchdown run by Campbell with 7:07 remaining in regulation.

A quick three-and-out by Bell was followed by a four-play, 59-yard touchdown drive for the Rebels. The drive ended with a 5-yard touchdown run by Dalton Summers with 4:52 remaining in regulation. The extra point ballooned the Casey County lead to 42-28.

Another three-and-out by the Bobcats was followed by a four play, 50-yard touchdown drive that ended with a 27-yard touchdown run by Glenn that secured the 21-point victory.

The Bell County junior varsity team wen to war with Corbin on Monday in what was a defensive battle. The... read more