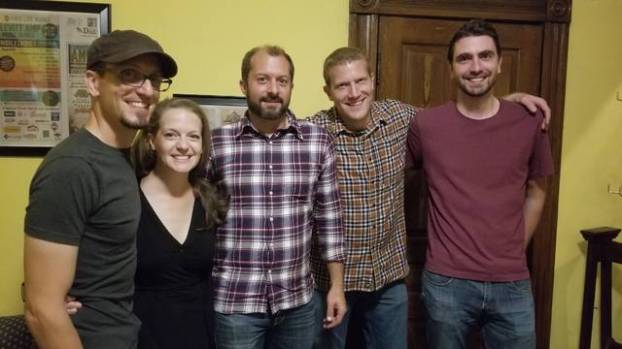 The Bloody Tinth pose for a band picture before taking the Levitt stage Thursday evening.

The headliner for this week’s Levitt AMP Middlesboro Music Series was The Bloody Tinth, a rock band with traditional Irish instrumentation.

Brother and sister duo Michael Sams and Rachel Schott formed the band almost nonchalantly one night while out at a bar.

When asked what the genesis of the idea to start a band was, Schott jokingly retorted “beer,” eliciting a laugh from the rest of her band mates.

The siblings grew up with a professional musician for a father, so they knew that music was going to be their lives one day. It was just a matter of when.

“I think music has been something we’ve done since we were little kids…I think we always knew it was going to be some important part of our lives,” Schott said.

The name “The Bloody Tinth” comes from a predominantly Irish regiment of the Civil War, but there is no especially strong Irish heritage the siblings mined from — they simply love traditional Irish music, and wanted to incorporate it into their sound.

The band is rounded out by Ryan Gorsuch, Joe Kendall and Nick Lorenz. Finding the rest of the band was as simple as posting an ad for a guitarist on craigslist.com. It was Gorsuch who answered the call and Joe and Nick followed soon after.

“We met through our good friend Craig,” Schott jokes.

Gorsuch is the predominant writer for the band, and stated that a lot of what they play is dubbed “Irish Trad” music, which is short for “traditional.”

“It’s songs, some of which have been around since the 50s and 60s in Irish Folk period. Some are even older than that…when we write original stuff, we all have different backgrounds largely in rock and bluegrass but in country as well so we’re just trying to incorporate that Irish influence into what we know about rock,” Gorsuch said.

When it comes to how to approach seeking a career in music, the band gave some more practical advice other than the vague “never give up” adage.

“If you don’t feel passionately, if you don’t enjoy the music you’re playing then find something else,” Schott said.

She also described herself and her brother as being very business minded in the beginning of the band’s career, and that they needed to be able to find that balance between the business and the art, which Gorsuch reiterated as being crucial to success in the business.

“As much as it would be awesome if it were all about the art, if it’s all about art you’ll never make it. You need both,” Gorsuch said.

The Oct. 5 concert will be the last one in the Levitt AMP Middlesboro Music Series for this year. Nick Dittmeier and the Sawdusters will open at 6:30 p.m. with Whiskey Shivers taking the stage at 7:30 p.m. All of the Levitt AMP concerts are in downtown Middlesboro and are free to the public.

According to nationalbreastcancer.org, one in eight U.S. women will be diagnosed with breast cancer in their lifetime. Breast cancer is... read more