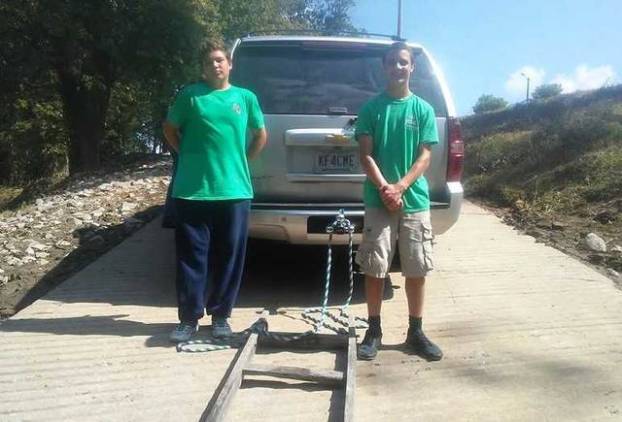 Canoe and kayak lovers from throughout the region joined together in Barbourville on Saturday to compete in one of the most anticipated — and most strenuous — annual boating trials in the area, The Cumberland River Challenge.

“We’re proud to announce that we had yet another wonderful year for the event, with a great turn out from several bordering states,” said Barbourville Tourism Director Denise Wainescott. “Everyone who attended seemed to have a good time, with several mentioning their eagerness to come back next year.”

The challenge — hosted by Union College, U-Canoe and Barbourville Tourism — consists of 15 miles on the river in which participants must endure everything from calm waters to beginner-level rapids, and, in this particular race, even a few unintentional wild animal obstacles, demonstrating to everyone just why the race is referred to as a challenge.

This year a new element was added to the event, as it joined The Explore Kentucky Initiative’s Kentucky Waterman Series as a points race for all competitors. In order for to receive a ranking in the series and the possibility of winning a new canoe or kayak, one must compete in at least four of the 12 Kentucky waterway races of the inaugural season. This provides both opportunity for local paddlers as well as tourism from around the state to the Barbourville area, therefore showcasing the beauty of the city and the Cumberland River to those who have yet to experience it.

“Our mission is to promote a healthy lifestyle in the Kentucky outdoors,” said Explore Kentucky Initiative director Gerry James, who participated in the challenge.

As always, the race began at the Knox County line and continued throughout the city, ending at the Thompson RV Park where competitors were greeted by fans and supporters of the race eagerly awaiting their return.

Paddling to the finish line in first place with a record-breaking time was Jim Burton of Knoxville, followed shortly after by Randy Ray of Elizabethtown, and then by George Hall of South Point, Ohio. They each received awards for their impressive times in which they completed the challenge, but the majority of the 23 participants agreed that the best part of the race wasn’t the prizes, but the experience in itself.

“I had an outstanding time being a part of the race. It was so well organized and I was very impressed with both the beauty of the area and the help from community volunteers,” said Hall, who finished third.

Volunteering to help haul the boats off of the boating ramp were three local Boy Scouts: Dillon Koen, Reed Brewer and Sam Elliot, all of whom served as a clear representation of what it truly means to help out around the community as none of the boys were paid or forced to volunteer. They simply offered to do so because they wanted to help make the challenge a great experience for participants in any way they could.

Barbourville not only plans to continue the challenge in the years to come, but also hopes to add even more wonderful attractions. They already have plans to add outdoors-related vendors to the event next year, as it will encourage an even larger turn out as well as promote nearby entrepreneurs. Any vendors interested in setting up for next year’s event should contact the commission.

Although the challenge concluded only a few days ago, the city of Barbourville is already preparing for its next big affair as it gets closer to the beginning of the annual Daniel Boone Festival, which is scheduled for the first week in October.