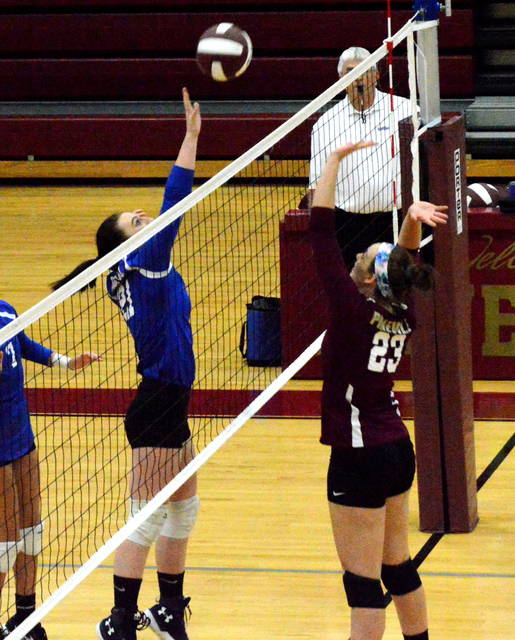 Pineville’s Jill Enix (23) and Bell County’s Emily Pendleton try to make a play at the net during their game on Thursday. The Lady Lions defeated the Lady Cats 3-1 to end a three-game skid.

The Pineville volleyball team ended a three-game skid on Thursday when they hosted Bell County. The Lady Lions used a two-set lead to walk away with a 3-1 victory.

For Pineville, the victory helps the team stop a three-game losing streak that included losses to Jackson County, Knox Central and Harlan County. Bell County lost its second game in a roll since picking up a 2-1 victory over Middlesboro on Sept. 23.

The first match set the tone for the remainder of the game for Pineville. The Lady Lions battled back-and-forth early in the set before falling behind 10-9 on a service error.

From that point, Bell County began pulling away after going on a six-point rally behind seniors Madison Mason and Emily Pendleton. An attacking error capped the run with the Lady Cats holding a 16-9 lead.

A Calie Pannell kill increased the Lady Cat lead to 20-18 before back-to-back points by the Lady Lions tied the game at 20-20. The two teams swapped points to bring the score to 21-21 before three aces by Enix gave Pineville a 24-21 lead.

Bell County battled back to tie the game at 24-24 before a service error and a point from Katrina Collett gave the Lady Lions the 26-24 set victory.

Pineville went on to win the second set 25-16 before Bell County forced a fourth set with a 25-20 win in the third. The Lady Lions secured the 3-1 victory with a 25-16 win in the fourth set.

Donny Grigsby – Stepping out of the shadows

Every team needs a strong support system to succeed. Coaches and players are the most visible, but the people working... read more