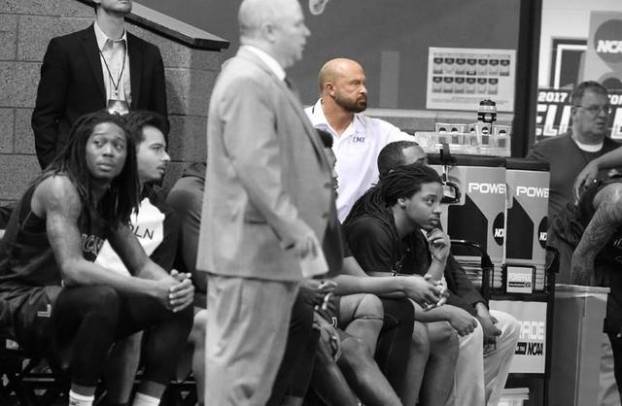 Donny Grigsby is in his sixth year as the head athletics trainer at LMU. He earned his bachelor’s degree in athletic training from LMU in 1991 and his master’s in education from LMU in 1994.

Donny Grigsby – Stepping out of the shadows

Every team needs a strong support system to succeed. Coaches and players are the most visible, but the people working behind the scenes are just as important.

At Lincoln Memorial University, a group of seldom seen support staff work long hours to ensure that all athletes have the best opportunity at success. That group, the athletic training staff, is helmed by head athletics trainer Donny Grigsby.

Grigsby is in his sixth year as the head athletics trainer at LMU. He earned his Bachelors degree in athletic training from LMU in 1991 and his Masters in Education from LMU in 1994. Like many trainers, he found his way into his chosen profession through his own athletic career.

“When I was in (Maryville College) I played (football). You’re in college and you get hurt and become familiar with the athletic trainers, and I thought this is a pretty neat field. It keeps me involved in sports and keeps me around athletes, but also athletic trainers are able to help. You’re able to help and touch a lot of people’s lives.”

“My freshman year at Maryville I had sprained ankles, my first reported concussion and broke my ribs”, recalled Grigsby. “I quickly became very familiar with the training room. The athletic trainer was Sharon Woods. I think she is still there and her work was an influence on my decision to go into athletic training.”

Grigsby joined the LMU athletic training program when it was in its infancy in the late 80s. At that time there was one professor who was a trainer and came to campus a couple of days a week to teach.

“I was the first ever graduate assistant athletic trainer in the program. At that time we would be farmed out to the local high schools,” remembered Grigsby. “I was sent to work with Thomas Walker High School in Ewing, Virginia. That was my first experience working with high school athletes.”

Upon completing his masters degree, Grigsby moved into the private sector working with HealthSouth Rehabilitation and Knoxville Orthopedic Clinic. He also interned for the U.S. Olympic Athletes during the 1996 Summer Olympic Games in Atlanta and was co-owner of the Tri-State Physical Therapy and Rehabilitation Clinics before returning to LMU.

In the 20-plus years since he graduated, the athletics training program has kept up with the growth of LMU in general.

“Athletics training itself has grown over the years. When I was going through my undergraduate you had to put in so many hours, I think it was like 1600 hours. There wasn’t a lot of classroom work. Now it’s geared more toward academics and course work and not as much on the field experience.

“The University as itself has grown so much with the medical school and athletic programs. Now we have three or four professors teaching the curriculum. It’s unbelievable how it has changed,” Grigsby commented.

With the growth of LMU as a campus came tremendous growth in the athletic programs. Currently, LMU participates in athletics as a Division II member of the NCAA. LMU has 21 varsity athletic programs with 380 athletes on its campus.

“I wanna say we have about a dozen students in the athletic training program. It’s incredible the experience they get here,” mentioned Grigsby. “They are on the field with the trainers seeing the athletes, seeing the injuries, evaluating the injuries and treat them, and then take them through the whole rehab process. Sometimes I don’t see how the students are able to juggle all the demands. We have students in the program who are also athletes, it is so demanding.

“I am so thankful it’s not just me. We have a great team of athletic trainers here. We have eight full-time staff and we are in the hiring process for one more,” said Grigsby. “We put in tremendous hours. Your phone is always buzzing, giving advice, to injuries, to scheduling rehab and doctor visits.”

When any of the trainers have to refer an athlete to a specialist it is Grigsby who takes the athletes to see the doctor.

“We work closely with Dr. Nicole Shields at the LMU Medical Clinic and we have a great doctor (Dr. Mathew Rappe’) at the Knoxville Orthopedic Clinic,” said Grigsby.

Once a student graduate, there are many different avenues open for a career in athletic training.

“There are several different options available,” pointed out Grigsby. “Obviously you’ve got high schools where the demand is growing. You now have state laws where high schools are required to have athletic trainers. The collegiate level, of course, and the professional level.

“Then you have the non-traditional level, business, clinics, hospitals. You have clinics that assign trainers out to high schools in their area or work at the clinic. There are a few different routes for students to go.”

The educational process doesn’t end with a bachelors or masters degree. New treatment methods and technology require trainers to continue the education process.

“New treatment methods, new modalities and staying up to date with new exercise techniques,” said Grigsby. “A couple of years ago at the Olympics cupping was seen as a new trend. We have started using that method here.

“As far as technology, it has really helped with documentation. We have to document just about everything we do. Communication is so important in our field, whether it’s with doctors, coaches, athletes or parents.”

With all the new sports added at LMU Grigsby and his staff have to be aware of the protocols and nuances associated with each sport.

“Then you have medium risk sports. Baseball and softball don’t have to be covered at all practices, but an athletic trainer has to be on call, three to five minutes away. Then the mild level, the runners or bowling where we are on call. So many sports every day spread out across campus so we have to know their schedules. We have a great team here where an athletic trainer is assigned to each team.”

The trainers see all types of common sports injuries, knee, elbow, ankle and muscle injuries. Once an athlete sustains an injury it is usually Grigsby who has to make the difficult call to a parent.

“Hopefully it’s not the first time you’ve spoken with these parents,” commented Grigsby. “Hopefully there is a sense of trust developed between the athlete and the parent and the coaches and athletic trainer. That is a very sensitive issue that we go through every day. I think if you are straight up and confident in you approach the parents always take it better. As a parent I can certainly understand their concern.”

Two of the most talked about issues trainers are dealing with these days are concussion and hydration. With all of the publicity surrounding the long term effects of concussion on the post athletic life of athletes Grigsby and his staff have to be acutely aware of the symptoms.

“You know the biggest thing with concussions right now is education. Obviously there is a big awareness worldwide with concussions,” said Grigsby. “We know more about concussions than we ever have. We have a policy here that all concussions are reported to me directly. We had a staff meeting this morning (Monday) and we have four athletes with concussions. It is an important issue, a very serious issue.

“I don’t know if we’ve seen concussions grow, but we have more awareness. It starts with athletes being more aware and buying in. If you (athlete) have a concussion you are pulled out of the sport and there is a protocol that our staff goes through. The athlete is monitored.”

Recognizing the signs of concussion are not only a trainers responsibility, but teammates, roommates, friends and parents. This trickles down to the high school and youth level athletic programs. Grigsby gave some tips on what signs to recognize.

“Number one, if there is a mechanism, in football or soccer, a hard hit where an athlete can develop signs or symptoms,” he said. “Obviously the headaches, ringing in the ears. One symptom we always ask our athletes is do you feel like you are in a fog, which usually accompanies a concussion. Maybe nausea. Those are signs or symptoms we are always looking for.”

Keeping athletes hydrated during the summer and fall is also more complicated than just drinking water once the game starts.

“Again this is awareness and creating awareness,” he commented. “If we know that it is going to be hot for a game we encourage our athletes to drink two glasses of water with every meal days leading into a game. We tell them to drink the sports drinks and stay away from drinks with caffeine (soda, coffee).

“Going into the day of the game having other tools on hand like ice towels, ice bags and access to fluids at all times. Being able to ice someone down immediately if they are showing signs or symptoms. We gotta play the weather!”

With over 20 years under his belt as a trainer at many levels Grigsby has some advice for anyone looking for a career in this field.

“First they have to show that they care, they have to be committed to the work schedule and working with the athletes,” he commented. “If it’s somebody that wants to be around sports and wants to be a part of a team then I would say yes, look into athletic training.”

Grigsby is a Bell County native, spending his early years in Pineville then moving to Middlesboro (Middlesboro High School) where he currently resides with his wife Jessica and three children, Taylor (in graduate school at Eastern Kentucky studying Occupational Therapy), Brooklyn and son Cayden.

Would Grigsby ever think about moving up to the professional sports ranks?

“Maybe if Coach Cal (UK coach John Calipari) called I might give it a thought”, he chuckled. “But this is home to me, I love this University. I’m very content and happy.”

Middlesboro will begin their district slate this week following a tough 47-6 loss to South Laurel on Friday. While the... read more