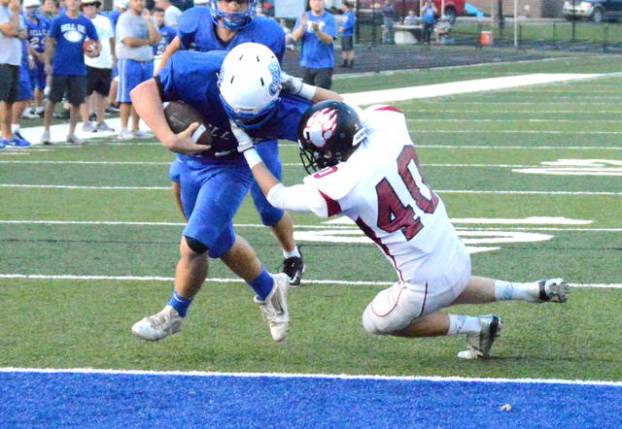 Tyson Thomas breaks a tackle as he enters the end zone during a junior varsity game against Harlan County. Over the past two weeks, the JV Bobcats have defeated both the Black Bears and Corbin.

The Bell County junior varsity team wen to war with Corbin on Monday in what was a defensive battle. The two teams needed extra time to decide a winner with the Bobcats leaving the field with a 14-8 victory.

Bell County scored their first touchdown on a 7-yard run by Jonathan Lankford to give the team an 8-0 lead. The Redhounds followed suit with a 7-yard touchdown run on their first possession to tie the game at 8-8.

From that point on, it was the defense that shined for both teams as neither offense could find the end zone for the remainder of regulation.

Corbin took over first in extra time. The Bobcat defense kept the Redhounds in check and forced a fourth-and-5 situation. Corbin through the ball to the end zone on fourth down, by Lankford knocked the ball away.

Bell County ended the game in overtime. On second down, Lankford completed a pass to Cody Green that took the ball down to the Corbin 1. After being stopped on third down, Hunter Bailey powered his way into the end zone to give the Bobcats a six-point victory.

On Sept. 18, the Bell County JV team picked up a lopsided 38-18 victory over Harlan County.

After forcing a three-and-out on the Black Bears‘ first possession, the Bobcat offense drove 55 yards in four plays. Josh Laws capped the drive off with a 1-yard touchdown run. The Will Dean conversion gave Bell an 8-0 lead.

A Chase Huff fumble recovery led to a 7-yard touchdown by Tyson Thomas. Lankford connected to Green to convert the two-point attempt to increase the Bell lead to 16-0.

The Bobcats ballooned their lead to 24-0 moments before halftime. Lankford intercepted the football and took it 51 yard for the touchdown. Lankford connected with Green to convert the two-point attempt.

The Pineville volleyball team ended a three-game skid on Thursday when they hosted Bell County. The Lady Lions used a... read more