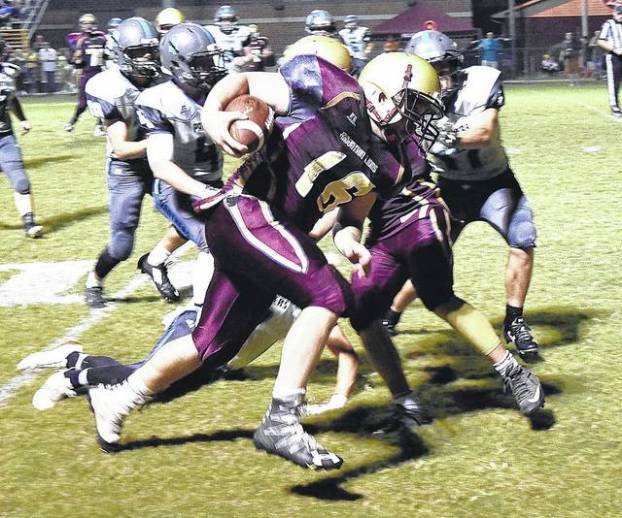 Lawrence Simpson runs off the edge during last week’s game against Cumberland Gap. On Friday, the Mountain Lions will square off against Thomas Walker, Virginia.

Pineville suffered a second consecutive loss last week when Cumberland Gap came to town. In what was an intense game, the Mountain Lions lost to the Panthers 32-12.

Pineville will try to end a two-game skid at 7:30 p.m. on Friday when the team plays host to Thomas Walker out of Ewing, Virginia. The Pioneers will be looking for their own rebound after dropping two of their last three games by double-digits.

Friday will be the first time Bart Elam has squared off against Thomas Walker since taking over as head coach of the Mountain Lions. The last time the two teams met was in 2004 — when Tuck Woolum was the head coach of Pineville. The Lions lost that game 33-12.

Over the past two weeks, Pineville has been attempting to get the passing game on point to open up the run. Against Cumberland Gap, Garland Ellis took over quarterback duties. He went 9-for-16 for 118 yards. He tossed two interceptions.

Reese Capps was Pineville’s main target against the Panthers with five receptions for 55 yards. Ellis’ effort seemed to help the rushing attack with Lawrence Simpson rushing for 47 yards and a touchdown and Matt Golden tallying 31 yards on 12 touches.

As for Thomas Walker, the Pioneers have one common opponent with Pineville — Harlan. The Pioneers handed the Green Dragons a 13-8 defeat on Sept. 1. In that game, Thomas Walker limited Harlan to 140 yards of total offense. The Dragons could only tally 106 yards on the ground.

Offensively, the Pioneers rushed for 135 yards behind the legs of Jacob Davis. The senior rushed for 83 yards on 13 carries. He hauled in a 50-yard touchdown reception as well. It was the only pass quarterback Dawson Lee completed all night.

Bell Middle jumped out to an early lead on Tuesday against Middlesboro Middle and was able to hang on for... read more