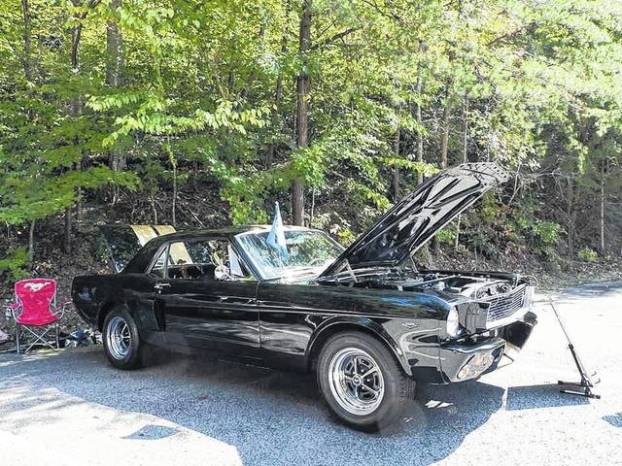 Best in show was awarded to Danny Liford, owner of this 1966 Mustang.

With even an 18-month-old child eager to participate, Pine Mountain State Resort Park’s first annual car show certainly appeared to be a success.

Considering that the majority of the majorly anticipated car shows of the season (Crusin’ the Crater and Rod Run being two of the most notable) have come to an end, Pine Mountain State Resort Park decided to try their hand at hosting their very first show this Saturday.

The show — complete with several trophies and concessions — was free of charge for both visitors and competitors and brought in a variety of car lovers from the area, including young Emmett Combs, 18 months, winner of the specialized “cutest in show” award.

According to his mother, Tiffany Combs, the keen toddler has developed a strong passion for cars at such an early age due to his car enthusiast father, Brance Combs, owner of A2Z Performance automotive shop in Cumberland Gap. He has been surrounded by automotive vehicles his entire (18 months of) life. Because of this passion, Brance decided to build Emmett his very own custom-made “vehicle” for his first birthday: a decked out wagon made to fit the child perfectly, complete with real tires and the American flag.

“Entering car shows has served as a great way to bring people into the shop in the past, but as of right now we’re in the middle of a couple incomplete projects, “ said Tiffany. “We still really wanted to find a way to be a part of the show, and we also thought it was time to include Emmett in the family activity as well.”

The best in show award was presented to Denny Liford for his 1966 Mustang. Liford is the owner of “Le’me Fixit”, a nearby home maintenance and basic repair shop, and is yet another proud automotive lover from the area.

Several other awards were also given out as the show came to an end, including: Best rod run awarded to John Prewitt for his 1939 Odes Mobile; most originality awarded to Harvett Bailey for his 1966 Ford Galaxie 500; best mopar awarded to Debbie Mays for her 1968 Rodrunner Plymouth; best Ford awarded to Freddie Mays for her 1934 Ford Coop; best truck awarded to Kennett Miracle for him 1951 Ford F1; and the manager’s choice award which went to Jason Jenkins for his 1974 Plymouth Duster and was chosen by park manager Rita Edmondson.

The event was hosted and organized by two familiar faces at the park, group sales coordinator Valerie Cornelius and assistant naturalist Brian Hale, both of whom seemed happy with the outcome of the first-year event. They, along with the rest of the park staff, are eager to see the event grow in the years to come.

“We definitely appreciate all of the participants and visitors and look forward to continuing the show next year on June 2nd,” head naturalist Keith Bowling said.

Get your ducks in a row! The Servolution Health Services Duck Derby 2017 is just around the corner. The event... read more