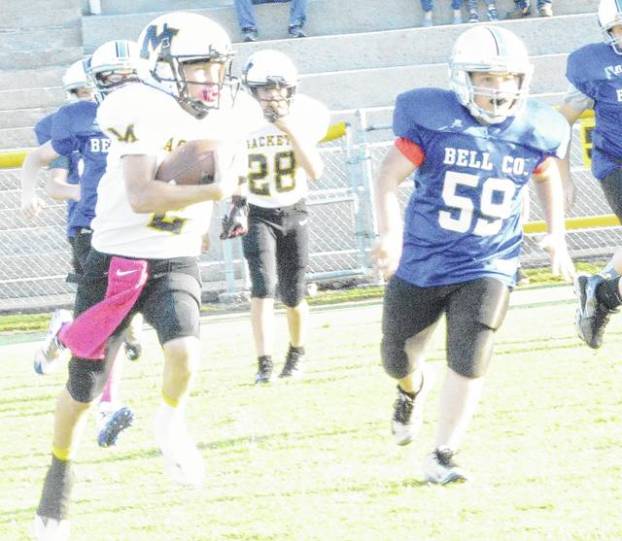 Cayden Grigsby finds the edge against Bell County on Tuesday. The quarterback scored two rushing touchdowns and returned a fumble for a touchdown during the Jackets 24-6 victory over the Bobcats.

The Middlesboro 5th- and 6th-grade team used a strong rushing attack to march past Bell County 24-6 on Tuesday. The win helped the Yellow Jackets rebound after suffering their only loss of the season to MAD Academy.

It was both a quick start offensively and a strong defense that helped Middlesboro get and maintain the lead throughout the game.

The Jackets started fast out of the gate scoring on the opening drive. After taking over at their own 42, a 9-yard run by Kam Wilson took Middlesboro down to the Bell 47. Cayden Grigsby capped the four-play drive with a 47-yard touchdown run with 4:28 remaining in the first.

Daniel Thomas converted the two-point attempt to give the Jackets an 8-0 lead.

Logan Reece opened Bell’s drive with a 13-yard run. On the next play, Grigsby recovered a George Pace fumble and took it 43 yards for a touchdown. The Thomas two-point conversion gave Middlesboro a 16-0 lead with 3:22 remaining in the first.

The Bobcats got on the board on the ensuing drive that stretched into the second quarter. Bell drove 60 yards in 11 plays. Reece ran for 28 yards during the drive and capped it off with a 4-yard touchdown run. The failed conversion cut the deficit to 16-6 with 4:44 remaining in the half.

The Jackets secured the victory on their opening drive of the quarter. The drive was all Grigsby with the quarterback capping the four-play drive with a 49-yard touchdown run with 3:36 remaining in the half.

Grigsby completed a pass to Rylie Foster to convert the two-point attempt and give Middlesboro the 18-point victory.

Bobcats fall out of top 10

For the first time this season, Bell County is out of the top 10 AP rankings in Class 3A. The... read more