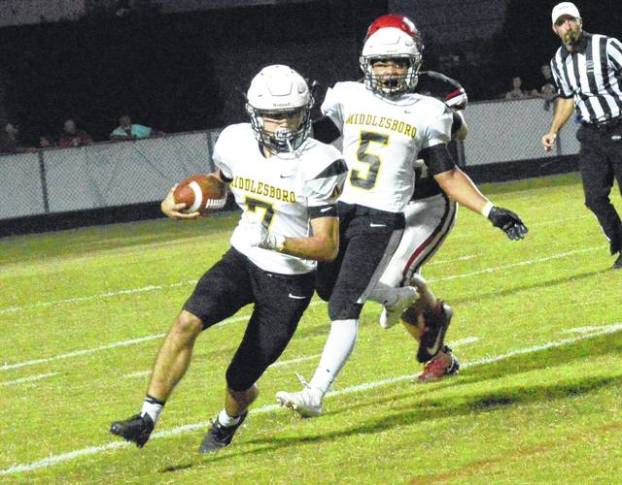 Owen McWilliams scrambles during Middlesboro’s game against South Laurel last week. On Friday, the Jackets begin their district slate when they welcome No. 4 LCA to Lee Majors Field.

Middlesboro will begin their district slate this week following a tough 47-6 loss to South Laurel on Friday. While the Jackets have suffered four losses this season, the toughest portion of their schedule is about to begin.

Middlesboro opens up their district schedule against No. 4 LCA at 7:30 p.m. on Friday. Since moving to District 7, the Jackets have only defeated the Eagles once — a 28-6 victory in 2013. Last year, LCA handed the Jackets a 49-6 loss. During that loss, Middlesboro was held to 31 yards rushing and 145 yards passing between three quarterbacks.

Last week, Michael Carroll went down with an injury and there isn’t any word on whether or not he will be able to play. Taylor McClelland also missed last week’s game with injury.

LCA has started this season dominating every opponent they have went up against. The Eagles (6-0) have defeated several ranked teams. LCA has averaged 50.5 points this season while holding their opponents to 23.8 points.

The highly-productive Eagle offense is powered by the duo of Dillon Wheatley and Logan Nieves. Wheatley is averaging 148 yards rushing and 2.2 touchdowns per game. He has tallied 885 yards and 13 touchdown on the year.

Nieves has proven his ability to be a dual-threat quarterback. He has completed 67 percent of his passes for 1,152 yards and 14 touchdowns. On the ground, the senior has racked up 715 yards and 12 touchdowns.

Drayden Burton and Caelan Lebryk lead the receiving corps. Burton has hauled in a team-high 361 yards and four touchdowns. Lebryk has 22 receptions for 309 yards and three touchdowns.

Defensively, LCA has allowed 889 yards rushing and 1,041 yards passing. Kaleb Bolton leads the team in tackles with 40. Jayden Barnhardt and Johnathan Kaufmann have tallied 35 and 34, respectfully.

The Middlesboro boys soccer team wrapped up their regular season on Tuesday when they welcomed Knox Central. After taking an... read more