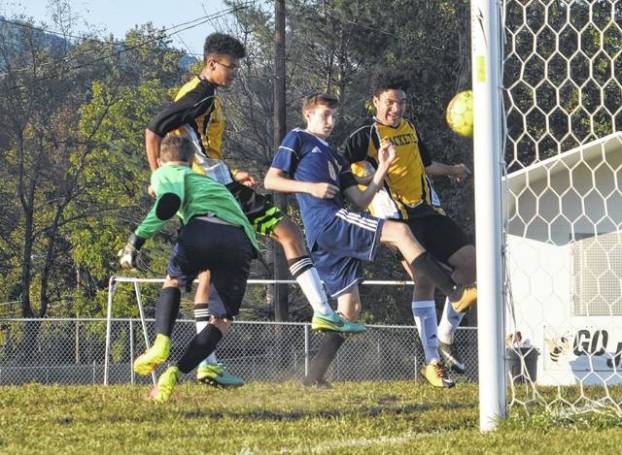 TJ Patterson scored on a follow-up goal during Middlesboro’s game against Knox Central on Tuesday. The Jackets lost to the Panthers 4-2.

The Middlesboro boys soccer team wrapped up their regular season on Tuesday when they welcomed Knox Central. After taking an early lead, the Jackets couldn’t hold on as the Panthers scored two unanswered goals in the second half to secure a 4-2 victory.

“We had a lot of great shots on goal in the first half. We got two of them in, but we must’ve had seven or eight really good shots on goal that didn’t go the first half,” said Middlesboro coach Tim Millett. “I was really pleased with our offensive aggressiveness. (Knox Central) had two really good goals in the second half. We had some opportunities and just couldn’t capitalize in the second half.

“A lot of that is due to us being short-handed. We were without two starters tonight due to injury. Matthew Brown was out and Soreaksmey Sin was out again tonight. We had two players leave the game just before halftime to go to an academic team match. That really just left us short-handed. We just kind of ran out of gas the second half.”

TJ Patterson scored the first goal of the game to give the Jackets a 1-0 lead early in the half. The score gives Patterson his second of the season.

“TJ Patterson is really becoming very aggressive offensively. It’s just a matter of time before he starts getting more of them in the goal because he’s really attacking the goalie when the ball is in the air,” said Millett. “He had two great shots after the goalie handled it, and one of them I thought was going in and it just missed.”

Knox Central responded with a goal of their own before Owen Collins put the ball in the back of the net to give Middlesboro a 2-1 lead. The Panthers scored three unanswered goals including two in the second half to walk away with the two-goal victory.

“Owen Collins has been with us his whole high school career, and Soreaksmey has been here a couple of years. They’re two outstanding young men. They put a lot of heart and soul into the program, and it’s really unfortunate Soreaksmey has been out a couple of games due to injury,” said Millett. “The other four are first year players. It’s unfortunate they didn’t play up until this year. Tyrese Simpson, who is a gifted athlete, has had a pretty good year. If he would’ve been out here for four years, he could’ve had an outstanding high school soccer career.

“Dawson Day is another player that has been productive for us this year. Him being a first year player, it’s been a lot of on-the-job training for him to understand the defensive side of the ball. The same thing with Tyler Brush. Tyler has been a very good player as a senior. It would’ve been nice to have him three or four years.

“Dustin Raines, who has been injured all year, has been great to have around. He’s a great kid and very supportive of everybody. It’s just unfortunate he hasn’t been able to make it out on the field for us. Overall, it’s just a great group of kids. They’ve all had fun. They all wish they had played before.”

The Jackets will have a week to prepare for the district tournament. They will play Harlan County in the opening round of the tournament.

Bell County continues the district portion of their schedule this week as they look to start 2-0 in the district.... read more