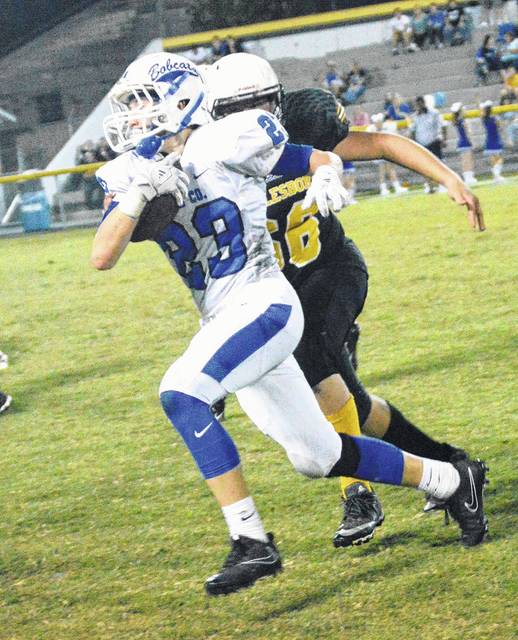 Brandon Baker outruns a tackler during Bell County’s game against Middlesboro Middle on Tuesday. The running back finished the game with 84 yards on 13 carries. The Bobcats handed Middlesboro an 18-8 defeat.

Bell Middle jumped out to an early lead on Tuesday against Middlesboro Middle and was able to hang on for an 18-8 victory over the Jackets.

The Bobcat offense was led by the three-headed monster that was Brandon Baker, Noah Cal and Dawson Woolum. Cal paced the trio with 88 yards and two touchdowns on six carries. Baker finished the night with 84 yards on 13 carries, and Woolum ran the ball 12 times for 76 yards.

Cameron Burnett went 2-for-3 passing for 36 yards. Woolum hauled in both passes from Burnett.

For Middlesboro, Seth Huff was the catalyst of most things offensively. The running back had 16 of the Jackets 21 carries on the night. He finished with 78 yards and one touchdown.

Huff also got in on the action through the air completing a 5-yard pass and hauling in 42 yards receiving. Blain Woody threw for 45 yards and went a perfect 2-for-2.

Bell Middle got on the scoreboard on the opening drive of the game. A 20-yard run by Baker on the third play of the drive moved the ball down to the Middlesboro 34. Three plays later, Woolum broke free on a 11-yard run to take the ball inside the red zone.

Cal capped the seven-play drive with an 18-yard touchdown run with 5:16 remaining in the first. The failed two-point attempt gave the Bobcats a 6-0 lead.

After forcing a three-and-out, Bell Middle found pay dirt on the ensuing drive that stretched into the second quarter. It was Woolum again that helped move the ball into the red zone. A 19-yard run by the running back moved the ball into Jacket territory.

Woolum broke free on a 24-yard run later in the drive to move the ball down to the Middlesboro 4. Burnett capped the 14-play drive with a 1-yard quarterback sweep for a touchdown. The failed conversion gave the Bobcats a 12-0 lead with 6:15 remaining in the half.

It was the Bell Middle defense that helped set up the Bobcats’ third touchdown of the half. Middlesboro’s Huff rushed for 18 yards on five carries before fumbling the ball on the Bobcat 44. Woolum recovered the fumble.

On the next play from scrimmage, Cal dashed right up the middle for a 60-yard touchdown with 2:11 remaining in the half. Another failed conversion gave Bell Middle an 18-0 lead.

Middlesboro Middle found the end zone on the opening drive of the third quarter. After taking over at their own 48, Huff ran for 8 yards on two carries to move the ball into Bobcat territory.

Following a false start, Woody hit Huff on a 39-yard strike to move the ball down to the Bell 10. A false start and an 11-yard loss on a sack helped move the ball back to the Bell 20. Huff capped the drive off with a 20-yard touchdown run with 3:05 remaining in the third.

Huff converted the two-point attempt to cut the lead to 10 points. Neither team found the end zone again letting Bell Middle walk away with the victory.

Bobcats fall out of top 10

For the first time this season, Bell County is out of the top 10 AP rankings in Class 3A. The... read more