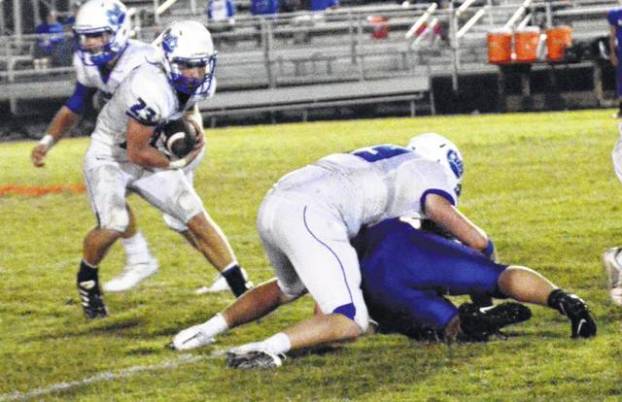 Colby Frazier follows a block during a previous game. On Friday, Bell County continues its district schedule when the Bobcats welcome No. 7 Casey County to Log Mountain.

On Friday, the Bobcats will get the chance to start the season 2-0 in the district when No. 7 Casey County visits Log Mountain. Last year, the Rebels finally pulled one off against Bell County when they defeated the Bobcats, 53-14.

Most would agree that last year was an outlier season for the Rebels with a senior-heavy squad leading the way. This year, most of those weapons are gone, and Bell County will have a chance to knock off a top 10 ranked team in Class 3A.

Similar to a year ago, Casey County will enter Friday’s game undefeated. The Rebels boast a 5-0 record with lopsided victories over Barren County, Campbellsville, Russell County, Jeffersontown and Jackson County.

While the team lost their all-state honorable mention quarterback, Austin Campbell has took over the role just fine. The junior has tallied 1,159 yards and 11 touchdowns through the air on 61 percent passing.

Tucker —who also rushed for 23 yards and caught four passes for 66 yards and a touchdown last season against Bell —has been effective running the ball. He leads the team in rushing with 638 yards and nine touchdowns. He is averaging 128 yards per game and 8.6 yards a carry.

Defensively, the Rebels have shutdown the run allowing only 92.2 yards rushing per game. They have allowed 179.2 yards passing per game.

AJ Glenn leads the team in tackles with 69. Dalton Lawrence and Ethan Ammons have recorded 36 and 34 tackles, respectively. Pendleton leads the team in interceptions with two for 65 yards. Luke Moore has recovered two fumbles on the year.

Pineville suffered a second consecutive loss last week when Cumberland Gap came to town. In what was an intense game,... read more