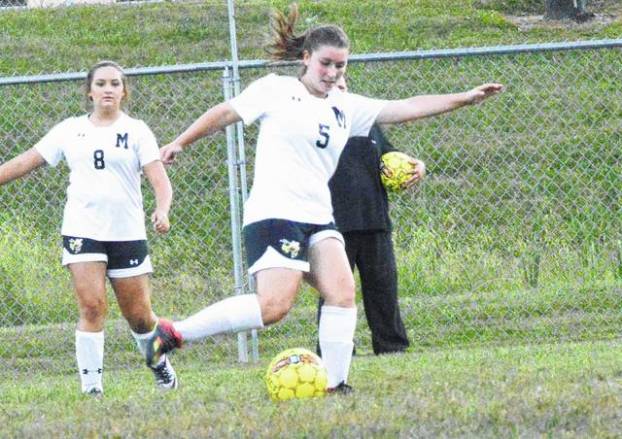 Emily Barnwell clears the ball during Monday’s game against Bell County. The sophomore finished the night with three goals and one assist. Middlesboro defeated the Lady Cats 9-0.

The Middlesboro girls soccer team sent their lone senior out in style on Monday when the team hosted Bell County. Strong second half play helped lead the Lady Jackets to a 9-0 victory over the Lady Cats.

“The first half we just came out dead. I got after them at halftime,” said Middlesboro coach Quinton Mason. “After halftime, they kind of got rolling, made passes, and became unselfish instead of trying to score constantly. They controlled the pace the second half really well.”

Senior Cierra Coots got in on the action and scored a goal in her final home appearance for Middlesboro.

“I’d like to recognize Cierra Coots. She’s played two years, and she got her first goal today,” said Mason. “That’s what I wanted, so I’m proud of here. She’s a good kid.”

Emily Barnwell paced the Lady Jackets scoring on three of her four shots on goal. Alexis Vanover scored on both of her shots on goal. Tiffany Thomas, Baylee Woody and Trinity Hardin also found the back of the net during the game.

Woody led the team in assists with four. Thomas finished with two assists while Barnwell tallied one. Gracie Stiltner earned the clean sheet on the night.

In the second half, the Lady Jackets played some people out of position. Mason said he moved some players to the front line after building a lead to give them a different perspective of the game.

“In the first half, I kind of kept everybody (in their normal position) because I wanted to get ahead a little bit. Then (I wanted to) get people that doesn’t ever get the opportunity to score up front to see a new side of the soccer game,” said Mason. “We have to do that because when we have players out some people have to play out of position. It doesn’t hurt to do that.”

Though Bell County didn’t walk away victorious, they showed improvement on both sides of the field. Defensively, the Lady Cats held Middlesboro to three goals in the first half before the Lady Jackets found their stride in the second.

“We started off really well. At halftime, it was 3-0,” said Bell coach Adam Huber. “We had a couple of bad situations where we weren’t marking and they took advantage of it. They had a couple of good crosses.

“We had about a 10-minute period…we just didn’t mark up or follow the runs. After that, we did it again. We finished the game fairly strong. It was just that 10-minute window we let in about five or six goals, and that was the difference in the game.”

Kayla Payne had moments on offense in the second half where she found space to take a shot but came up empty handed each time.

Middlesboro (3-8) finishes up their regular season on the road Tuesday when they travel to J. Frank White Academy.

Bell County (0-9) will host J. Frank White Academy on Thursday in the team’s final home game of the regular season.

Paul Finebaum? Heard of him? You should, especially if you’re an Southeastern Conference fan. He is all over the airwaves... read more