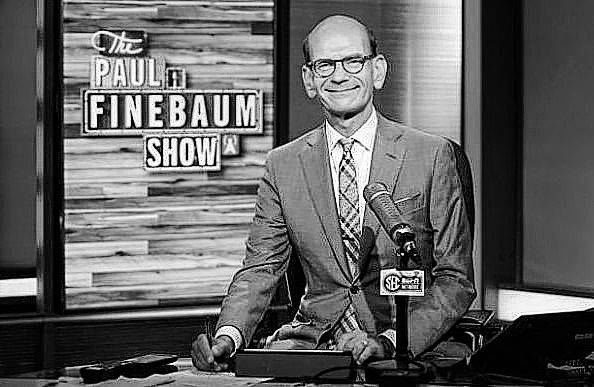 Paul Finebaum is a broadcaster for both the SEC and ESPN networks as an expert on the Southeastern Conference.

Heard of him? You should, especially if you’re an Southeastern Conference fan.

He is all over the airwaves as a colorful and controversial broadcaster on SEC and ESPN networks with strong opinions on many issues. And he tours with the SEC Nation, the traveling pregame show that is shown live from a different campus on Saturdays, previewing college football games on SEC Network.

And Sports Illustrated once rated him as one of the 20 Most Powerful People in Sports Media in 2013.

But the outspoken Finebaum, who was raised in Memphis, Tenn., actually didn’t plan a career in journalism when he was a freshman at the University of Tennessee during the mid-1970s. He loved politics and eventually earned a degree in political science from UT in 1978.

“I was fascinated by politics growing up,” explained Finebaum, who kindly took a timeout to have an e-mail interview with this columnist. “My family was fairly active and it was my first love. Ultimately, I had planned on either political work or becoming a lawyer. But interestingly, as a child of Watergate, it led my passions to journalism, which occurred while I was at UT. I joined the school newspaper halfway through my tenure.”

During his growing up years, Finebaum also followed sports and he had favorite teams, including the Kentucky Wildcats.

“My favorite baseball teams were (New York) Yankees, which was my father’s team, and (the St. Louis) Cardinals, who were nearby,” he said. “We followed the local college – Memphis State. I was an ABA fan, going to many games (following the Memphis franchise which had different owners and nicknames – Pros, Tams and Sounds – during the 1970s). I even met coach (Adolph) Rupp once, who was president of the team. It was a big thrill since I had always been a Kentucky basketball fan from a distance. I hated Louisville since they were Memphis State’s biggest rival.”

Even though he graduated with a non-communications degree, Finebaum landed a job as a newspaper columnist and investigative reporter, and later as radio broadcaster in Alabama.

“I was always curious which led me to reporting,” he said. “Of all of the things I have done, I was probably best at being a reporter. I learned a great deal about listening and later it helped me as an interviewer.”

Finebaum was asked about his most difficult interview he has had in his broadcasting career?

“Some of the most difficult have been with well-known people who did not really want to do the interview,” he commented. “But probably one of my favorite interviews was the (noted) author, Pat Conroy. I loved his writing and prepared meticulously for the interview. Afterwards, he put his arm around me and said, ‘Finebaum, during my book tour, I’ve been on the Today Show, Good Morning America, Larry King, MSNBC but that was the best f…..ing interview on the tour. Well done.’ “

Finebaum almost didn’t leave his broadcasting work in Alabama for ESPN in 2013 because his wife, Dr. Linda Hudson, already had a successful practice in internal medicine in her hometown of Birmingham area. It was a difficult decision for the couple.

“I loved Birmingham, and it was my wife’s hometown and her parents and all her friends were there,” he recalled. “But it was an opportunity to work at ESPN and she told me to take the job.”

They now live in Charlotte, N.C., and that’s where his popular “The Paul Finebaum Show” is based. In addition, his wife has a big medical practice there.

Dr. Hudson is a big sports fan, too. “Even though she had a degree from Vanderbilt, she grew up an Alabama fan. She does pull for Vandy as well,“ Finebaum added.

Some folks have called Finebaum the “Voice of the SEC” or the “Oprah Winfrey of College Football.” His outspoken personality seemingly has worked out really well in his journalism career, especially in radio and television. He was asked if he had always been that outspoken in various issues ever since he was a child.

“Got it from my mother – who had an opinion on everything,” explained Finebaum. “She was wonderful. My dad died when I was 15 and she became the guiding influence in my life.”

He pointed out he was born in Memphis with a “distinctly New York influence” and added his parents and an older sister had all been born there. “(I was) the only Southerner,” he said.

Finebaum, by the way, watched the Kentucky-Florida showdown on SEC Network Saturday night when the Gators bounced back and edged UK 28-27.

“(I’m) terribly disappointed by the loss,” he said. “Kentucky had better team and should have won.”

The broadcaster agrees the Kentucky boss would be a good fit for TV broadcasting whenever Calipari retires from coaching if he’s interested.

“I believe John could easily become the next Dick Vitale,” Finebaum said. “He is funny, opinionated, has great command of the stage and camera. The only problem might be getting him to stop talking!”

It almost felt like Friday’s game between Pineville and Cumberland Gap was personal. The Panthers had several personal fouls while... read more