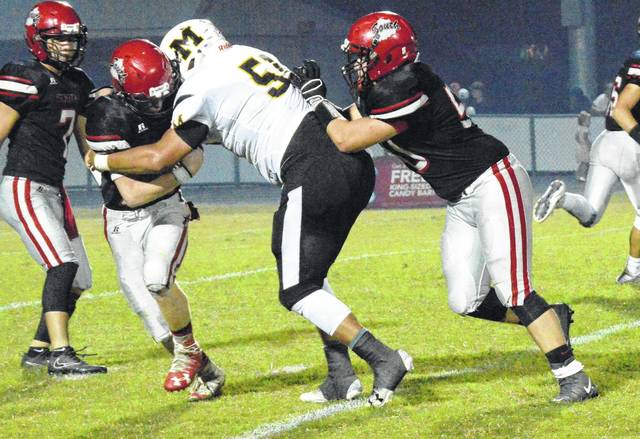 Nick Poindexter wraps up a South Laurel runner during Middlesboro’s game against the Cardinals. The Jackets lost the game 47-6. Middlesboro returns to action on Friday when they square off against Lexington Christian.

Middlesboro can’t seem to catch a break this season. The Yellow Jackets had momentum on their side entering Friday’s game against South Laurel with back-to-back wins in their past two games. Injuries began to stack up for Middlesboro, and the Cardinals found their stride in the second half en route to a 47-6 victory.

“We’ve not traveled well this year. We challenged (our kids) to come in focused, and we weren’t sharp by any means,” said Middlesboro coach Zach Massengill. “We weren’t real excited. We were pretty flat. We just didn’t come out with a lot of pop.

“The second half, the challenge was to come out and start fast, and we played well defensively that first drive. We came out, we’re flying around on kick off, we make a few big plays, and cause a fumble. We get the ball back on the 30, and then we stall out. The kids just dropped their head at that point, and it spiraled.”

The injury bug continued to bite Middlesboro with a few players having to leave the game. Michael Carroll left in the second quarter with an apparent leg injury, and Alex Mason left the game with cramps. While Mason is likely to return next week, Carroll could be added to a long list of players missing multiple games.

“It’s frustrating. We lost Taylor McClelland this week on Tuesday at school, so that shifted our linebackers. Then Alex starts cramping and couldn’t go back in, and we stuck (Eric Helton) in at safety and he competed,” said Massengill. “We’re just dinged up. Drake Thomas didn’t play. We got more standing than we’ve got playing right now. We got to get healthy.

The Jacket offense had a tough time finding any momentum during the game. Carroll paced the team with 75 yards rushing and a touchdown on six carries before leaving the game. Owen McWilliams tallied 33 yards on 18 carries.

Defensively, Middlesboro had trouble stopping Adrian Fultz. The senior quarterback went 11-for-16 for 195 yards and two touchdown. On the ground, he ran for 21 yards and three touchdowns on seven carries.

William Lanior led the way on the ground with 221 yards and a touchdown on 19 carries. He also caught two passes for 56 yards.

South Laurel showed glimpses of things to come early in the game. On their first play from scrimmage, a wide receiver pass went 56 yards for a touchdown, but Dalton fumbled the ball out of the end zone for a touch back.

After forcing another punt, Ace Allen returned the kick for a touchdown. The score was called back for clipping.

The penalty wouldn’t keep the Cardinals off the board on the drive. South Laurel nickle-and-dimed their way into the red zone after taking over on their own 43. A 13-yard pass from Fultz to Dalton helped set up a 1-yard touchdown plunge from the quarterback with 3:30 left in the first.

The missed extra point gave the Cardinals a 6-0 lead.

It was Middlesboro who found the end zone first in the second quarter. After the defense forced South Laurel to punt, Carroll broke free on a 79-yard touchdown run with 10:37 remaining in the half. The missed extra point tied the game at 6-6.

The Cardinals responded on the ensuing drive with Fultz capping a seven-play drive with a 4-yard touchdown run. The Conner Wilson extra point gave South Laurel a 13-6 lead with 7:55 remaining in the half.

A fumbled snap on a Middlesboro punt set up a four-play, 27-yard touchdown drive by the Cardinals. Fultz found pay dirt on an 8-yard run with 2:06 remaining in the half. The extra point increased the lead to 20-6 heading into halftime.

South Laurel really found their stride in the second half. After the Cardinals fumbled on the opening drive, Lanior scored on a 17-yard run with 7:16 left in the third. Wilson’s extra point increased the lead to 27-6.

After recovering a fumble on ensuing drive, Fultz connected with Sams on a 26-yard touchdown pass to increase the lead to 33-6 with 6:36 remaining in the third.

The South Laurel defense kept Middlesboro out of the end zone on the next drive after the Jackets made their way to the Cardinal 14. Five plays later, Fultz found Dalton on a 27-yard touchdown strike that ballooned the Cardinal lead to 40-6 with 2:05 left in the third.

South Laurel secured the 41-point victory on the opening drive of the fourth quarter. Jacob Christensen capped off a six-play drive with a 2-yard touchdown run with 10:15 remaining in the game.

Middlesboro (2-4) will return to action on Friday when they open district play against Lexington Christian (6-0).