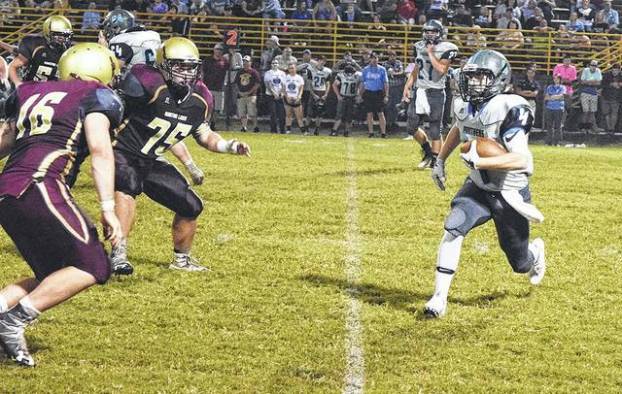 Cumberland Gap’s Peyton Welch runs with the ball as Pineville’s Lawrence Simpson and Nick Holbrook close in. Welch had a 61-yard touchdown catch in the game.

It almost felt like Friday’s game between Pineville and Cumberland Gap was personal. The Panthers had several personal fouls while Pineville’s Josh Lawson was ejected in the fourth after an altercation with a Gap player. In the end, the Panthers handed Pineville a 32-12 defeat.

Penalties are the biggest story of the game. Cumberland Gap committed 24 penalties for 255 yards, including 10 15-yarders for either personal fouls, roughing the passer or unsportsmanlike conduct. Pineville had 11 penalties for 115 yards.

Caden Brunsma had an impressive night through the air. He went 4-for-7 for 136 yards and two touchdowns. Brunsma connected with four different receivers. Peyton Welch hauled in 61 yards on his solo catch for a touchdown. Gage Ellison had one touchdown on 32 yards receiving and one catch.

Matt Golden and Lawrence Simpson helped lead the rushing efforts for Pineville. Golden finished with 37 yards and a touchdown on 14 carries. Simpson ended with 34 yards on 10 carries.

Pineville got on the board first after driving 88 yards on 13 plays. A fake punt on fourth-and-1 combined with a 15-yard facemask and an unsportsmanlike conduct penalty took the Lions down to the Panther 15.

Golden capped the drive off with a 3-yard run with 4:55 remaining in the first. The failed conversion attempt gave Pineville a 6-0 lead.

Cumberland Gap tied the game at 6-6 with 10:35 left in the half. After forcing the three and out, the Panthers took over possession at the Lion 38 following a punt. Muggridge ran the ball six times for 35 yards on the eight-play drive that was capped off by a four-yard touchdown run by the running back.

With 3:16 remaining in the half, Cumberland Gap took a 13-6 lead after Brunsma hit Welch on a 61-yard strike. The Panthers ended the half with a 32-yard touchdown pass from Brunsma to Ellison. The Nick Neverstitch kick made it 20-6 heading into halftime.

Cumberland Gap opened the third quarter with an Ellison interception returned for a touchdown. Golden blocked the extra point to keep the deficit at 26-6 with 8:07 to play in the third.

Muggridge scored the final touchdown for Cumberland Gap with 2:18 remaining in the third. A 4-yard touchdown run increased the lead to 32-6.

Pineville scored with 12 second remaining in the game when Ellis found Simpson open over the middle for a 19-yard touchdown that cut the deficit to 20 points.

Jay Compton with the Pineville Sun contributed to this report.

If Friday’s game between Bell County and McCreary Central was a movie, it would’ve been a western. The two teams... read more