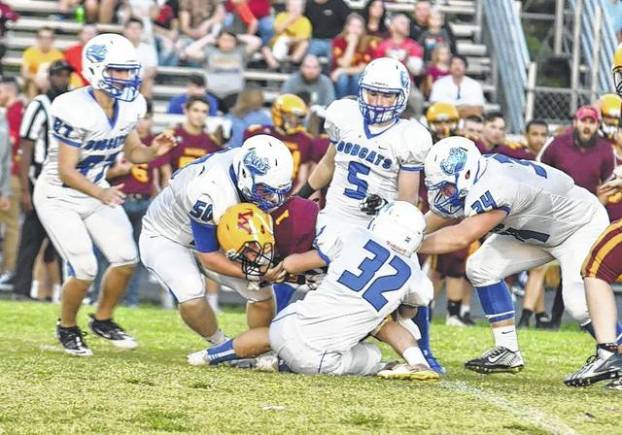 A pack of Bobcats take down a McCreary Central runner during Friday’s game. Bell County won a shootout against the Raiders, 75-43. They return to action on Friday when they continue their district slate against Casey County.

If Friday’s game between Bell County and McCreary Central was a movie, it would’ve been a western. The two teams were in a shootout as neither defense seemed able to slow down the other team. When the dust cleared, it was the Bobcats who stood victorious with a 75-43 victory over the Raiders.

Colby Frazier paced the high scoring Bell County offense with a massive 331 yards rushing and seven touchdowns on 16 carries. Jordan Wombles and Will Dean recorded 74 and 73 yards, respectively. Dean also tallied a touchdown on the night.

On the opposite side of the field, Brandon Troxell made it a long night for the Bobcat defense. The senior running back ran for 269 yards and four touchdowns on 29 carries.

Both teams had some success throwing the football. Bell County’s Issac Collett finished the game with 44 yards and a touchdown on three completions. Ethan Murray hauled in the lone touchdown reception.

McCreary Central completed six of their passes for 96 yards and a touchdown.

Bell County started fast out of the gate claiming a 21-0 lead early in the game. A 15-yard run by Frazier gave the Bobcats a 6-0 lead with 10:06 left in the opening quarter. The sophomore running back followed that up with an 88-yard touchdown run with 6:32 remaining in the quarter. The Wombles two-point conversion increased the lead to 14-0.

Frazier continued his dominance over the Raider defense with a third touchdown in the first quarter at 1:57. He broke free on a 36-yard touchdown run. The Murray two-point conversion widened the margin to 22-0.

With seconds remaining in the first, McCreary Central finally found the end zone on a 3-yard scamper by Troxell to cut the lead to 22-7 at the end of the first.

The Raiders made it a one possession game early in the second quarter. A 9-yard touchdown catch by Hunter Jones narrowed the lead to 22-15 with 9:01 left in the half. Bell County responded with a 65-yard interception return for a touchdown by Antonio Zachery. The two-point conversion increased the Bobcat lead to 30-15 with 2:43 remaining in the half.

The Bobcats ended the half with a 5-yard touchdown pass to Murray that gave Bell County a 38-15 lead heading into halftime.

McCreary Central continued to stay within reaching distance with a 7-yard touchdown run by Troxell to open the third quarter. The two-point conversion cut the lead to 38-23. Two minutes later, Dean broke free on a 43-yard touchdown run that extended the Bobcat lead to 44-23 with 8:40 left in the third.

Back-to-back touchdowns by the Raiders cut the lead to 44-35 at the end of the third. The first came with 6:41 remaining in the quarter when Troxell ran for a 12-yard touchdown. Ryan Jones found pay dirt with 2:16 left in the quarter on a 22-yard run.

Bell County pulled away in the fourth quarter. The Bobcats outscored the Raiders 31-8 down the final stretch off the legs of Frazier. The running back scored four touchdowns in the final quarter, while Troxell added one touchdown for McCreary Central.

Middlesboro can’t seem to catch a break this season. The Yellow Jackets had momentum on their side entering Friday’s game... read more