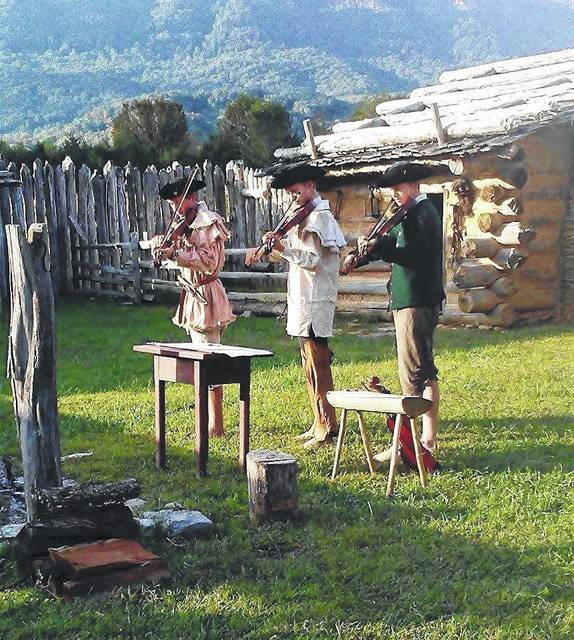 The Sons of Liberty performed and discussed several historical songs during the Spirit of ‘76 Event.

Spirit of ‘76 event held at WRSP

Not all historic heroes fought on the battlefield with swords and armor — instead, many preferred to use the power of the pen to get their point across.

As politics grew in patriotic times, advertising became one of the most popular — and effective — ways to sway the opinion of the general public. One of the best ways to get people to listen to advertisements was, of course, to put it in a form of entertainment. Thus, many songs and poems with a deeply rooted political agenda were created.

The Spirit of ‘76 event, held at Wilderness Road State Park’s Martin’s Station fort over the weekend, focused on showcasing these often under-appreciated wordsmiths and the artwork they created.

The musical group, Sons of Liberty, volunteered to host the unique event, as their specialty is focused around playing historical ballets and discussing the true meaning behind them, which often times can become lost to the general public with time.

“This program does a wonderful job of bringing the fort to life, but if you dig a little deeper I believe you can even see a little into the history of not only our nation, but the world itself through the tunes and lyrics of these songs,” said park ranger Ryan Teague.

The event ventured a bit deeper than usual into several famous songs and poems to reveal a much more complex origin behind the history-changing tunes. For example, many are completely unaware of the fact that the Star Spangled Banner borrowed its tune from ‘To Anacreon in Heaven,’ a 1700s praise to wine and other pleasures. Even more people are oblivious to the fact that the ‘White Cockade’, considered by most to simply be a fun-loving patriotic dance song, was actually a song of defiance and was marched to by the American army during the American Revolution as an insult to the British.

This is but a small sample of the many songs that were analyzed and revealed to have a not so well known backstory during the event. Anyone who was unable to attend the Spirit of 76 but would like to hear more of these shocking meanings may buy the Sons of Liberty’s CD, Celebrating Early American Musical Traditions, in the park’s gift shop. The CD includes several linear notes regarding each song.

Sons of Liberty consists of three brothers, Daniel, Joshua and Noah Smith, all of whom share both a love of music and of history, specifically that of which is associated with Patriotic times. Although they have been volunteering at the park for three years now, this was their first time performing this particular show.

“We’ve seen these three boys perform at this fort for the past three years and they’ve brought wonderful enthusiasm and authenticity. It makes the entire experience of the park more real,” said David Cadle, who regularly attends events at the park.

Martin’s Station, at which the event was held, is an authentically reconstructed frontier fort open to the public Wednesday through Monday each week. The fort is complete with rangers accurately portraying 18th century men on a daily basis and is home to several history-related events held regularly at Wilderness Road State Park.

Scrip enthusiasts are invited to Pine Mountain State Resort Park at Pineville on Sept. 23 for the annual convention of... read more