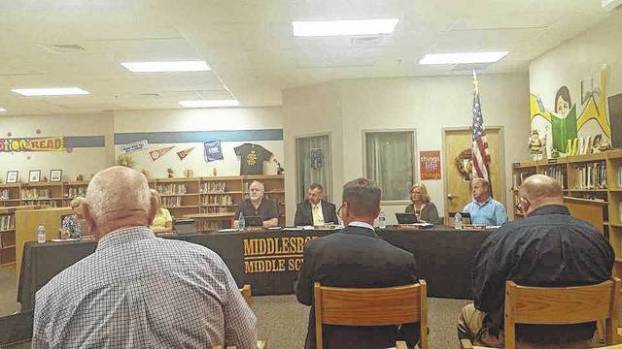 Middlesboro Independent off to a good start

With exceptional test scores, new construction plans, and an abundance of success among both students and staff, it’s safe to say the Middlesboro Independent School district is certainly off to a productive start to the school year.

While the main focus of Tuesday’s Middlesboro Board of Education meeting was, of course, Superintendent Steve Martin’s resignation, it also revealed another important detail: how well the district has been doing this year.

In the short time the school year has been in session, Middlesboro Independent Schools have already experienced a great deal of success.

During the first month of the school year there were 482 students enrolled in kindergarten through fourth grade, however, as of Tuesday that number has increased by 14 students, putting it at 496 enrollments.

Test scores have been through the roof; with freshman testing number one in the region in math and the biennial TELL survey revealing that the teacher approval rating is currently at a highly impressive 90 percent. While the state test scores have yet to be revealed, they have been hinted to be worth bragging about.

“I can’t reveal exactly what the scores are yet, but I can say that many of you will be impressed,” said Martin.

Well attended open houses prove that parents are also showing great interest in their children’s academics and care about how their child is doing in the classroom, which is important in the growth of each kid.

Along with the test scores, individual students have already managed to accomplish a lot in the year as well. The high school’s choir had all nine students who auditioned make it into All Festival and one student, Jordan Hensley, even making the All-National Honor choir.

All-National Honor Choir is a highly prestigious choral group which represents the top performing high school musicians in the nation, and Middlesboro Independent Schools have had at least one student represent the district in it for years. Hensley will be performing amongst other thriving musical students at Disney World in Orlando, Florida on Nov. 26-29.

However, not only are students making huge accomplishments this year, but the district itself remains on schedule with new elementary construction plans. With solely locals working on the construction, it is projected to finish on schedule and many are excited to finally see the results.

“It seems as though they’re doing a nice job. I know I’ve said this before, but it’s very neat,” said board member Charla Costanzo.

The key to the district’s success seems to lie in the importance they place on the wellbeing of the students and making sure they have the resources they need to set them up for a good future.

“The child comes first in our district, and I definitely think that shows in our classrooms,” said board member Bill Johnson.

The Middlesboro City Council approved a change in zoning and ad valorem tax levies during this week’s September meeting. For... read more