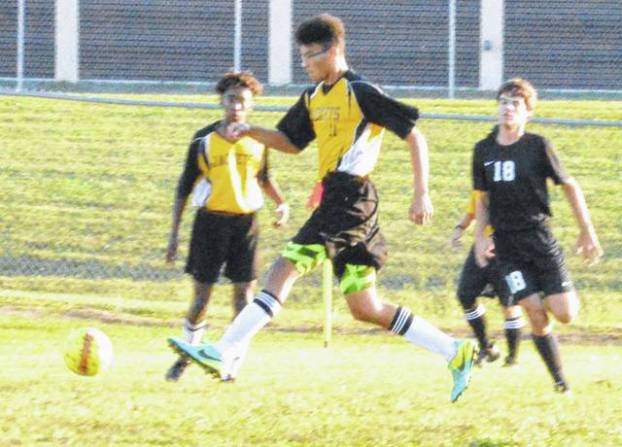 Tyrese Simpson scores during Middlesboro’s game against Whitley County on Thursday. The Yellow Jackets lost 5-2 to the Colonels after holding a one-point lead at halftime. Middlesboro returns to action on Tuesday against Knox Central.

For a moment, it looked like the Middlesboro boys soccer team was going to steal one away from Whitley County on Thursday. Up 2-1 going into halftime, the Yellow Jackets seemed to keep the Colonels on their heels through the first period.

“We just didn’t pick up our game. We played hard the first half. (We) played aggressive the first half, and the second half (Whitley County) picked it up and we didn’t respond. We battled. I’m proud and I’m happy with the kids overall.”

Tyrese Simpson and Alvero Arieta netted Middlesboro’s two goals during the game. Simpson’s goal came early in the first half. A clearance from Joey Napier helped set up a shot on goal by Jabari Kyle. The Whitley County keeper deflected the ball and Simpson followed up with the goal to give the Jackets a 1-0 lead.

The Colonels responded quickly with a goal of their own to tie the game at 1-1.

Over midway through the game, a yellow card inside the box resulted in a penalty kick for Middlesboro. Arieta easily scored on the kick to give the Jackets a 2-1 lead heading into the half.

While goal keeper Steven Poore made some great saves in the second half, Whitley County was too aggressive for the Middlesboro defense in the remaining 40 minutes of the game.

Early in the half, Damon Lyons caught Poore out of position and kicked the ball past the keeper to even the game up at 2-2. Later in the game, Payton Watson nailed a shot from about 35 yards out into the far post to give the Colonels a 3-2 lead.

Watson earned a second goal midway through the second half. While Poore was trying to make a save, the midfielder slid and kicked the ball into the back of the net to increase the lead to 4-2.

Neel Patel finished the game off for Whitley County with a goal that secured the three-point victory for the Colonels.

Despite taking a loss on Thursday, Middlesboro’s team looked much more improved than they did earlier in the season. Just a short two weeks ago, the Jackets lost to the same Whitley County team by seven points.

“We are much more improved. The kids are working hard. They are starting to understand some of the things that we’re trying to do,” said Millett. “We keep working on the fundamentals and the skill of handling the ball, dribbling the ball, passing the ball. We’re not quite there yet, but we’re working on it.

“I’m really pleased with the progress that we’ve made. We’ve battled, we’ve worked hard in practice and we’re starting to understand. We just got to keep working. We got Knox Central coming in Tuesday. It’s senior night. We just got to get ready for Tuesday.”

Middlesboro (2-4) finishes the regular season at 6 p.m. on Tuesday against Knox Central (6-4).

Whitley County (4-9) returns to action on Monday when they travel to Pulaski County (6-5).

Earlier this week, Middlesboro picked up their second win of the season when they traveled to Harlan County. The game was similar to their first encounter as the Jackets walked away with a 3-2 victory.

“It was another exciting game between us and Harlan County. We got up on them and battled them. They have (Marcus Kelly)…He makes everybody better,” said Millett about the Harlan County game. “It was a battle. We played hard. We had a couple kids go down with injuries.

“We finished the job at Harlan County. It was a late night, but again, we played and we finished that game. We will probably play Harlan County first round of the district the way it’s shaping up. We will take a look at it and go at it again.”