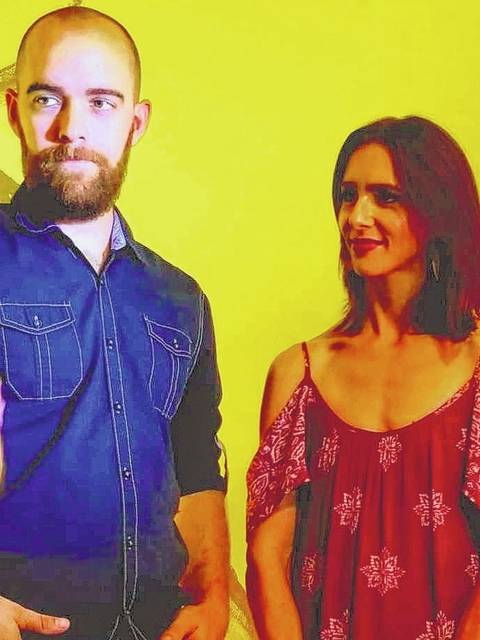 Melissa and Kyle Triplett backstage in the green room before taking to the Levitt stage.

The Bankesters are a true family band in every way. Three generations were in the green room before their set — parents, children and grandchildren.

One thing that set the Bankester clan apart from the other acts so far in this year’s Levitt AMP Middlesboro Music Series was their sense of pure contentment with themselves as a band and as a family.

If they were at all stressed from the work that comes with taking care of a family while being on the road for gigs, they certainly did not show it.

With the duties of parenthood being the full-time responsibility that it is, it became clear early on that the entire family would not be able to sit down for an interview, but Melissa Triplett, who Phil stated usually handles media duties, was more than happy to sit down and talk about the dynamic of playing in a family band and how music was always something intrinsic for the entirely family.

“We’ve always had music stuff going on in our lives. My parents were both musical. We were all taking piano lessons when we were four, always singing together around the house. We always loved music,” she said.

The saying “never work with family” is something that simply doesn’t register for the Bankesters.

“One thing that’s really cool about being able to play and especially sing with family is that it ends up being very intuitive. You already know each other really well, so you can just intuit what that person is going to do, musically…it has its challenges for sure. You have to do business, and then there’s also family stuff. So those dynamics can be really difficult to navigate sometimes. But I think we’ve always tried really hard to put everyone’s best interests at heart and be sure everybody has a voice that’s heard and keep it collaborative,” she said.

Melissa loves the feeling of connecting with an audience.

“That’s really a wonderful experience. It makes the whole show better when you have a good connection with the audience and you can tell they’re engaged and enjoying what you’re doing. It feels good as a performer and I feel it brings out the best in the people on stage,” she said.

On the opposite side of the coin, playing for a bad crowd only gives Melissa and band more incentive to put on a good show.

“It makes it a little bit harder to play and get through because it’s an investment emotionally, you’re bringing a lot of energy to the show…when the audience isn’t feeding back their energy it’s just a little harder. We still want everybody to experience our music and leave happy. That’s really our motivation,” she said.

The Bankesters are praised for their vocal harmonies, a talent that is hard to master, a just like writing and performing music, Melissa says that the family has been lucky that creating those harmonies is almost like second nature for them.

“It’s one of the intuitive things I was talking about earlier…doing the vocal harmonies and really working on cool arrangements is one of my favorite parts of the process…it takes a little bit of time to figure out what we want to do, but the actual execution of it is pretty painless,” she said.

At this point in the conversation, Phil Bankester added that when the sisters were children and they would listen to music, one would start singing and the others would chime in and vocal harmonies would naturally form out this.

On what aspiring musicians should do when finding their footing in the business, Melissa added “Try and find your signature sound or the thing that is really authentically and you and really be true to it.”

Middlesboro Independent off to a good start

With exceptional test scores, new construction plans, and an abundance of success among both students and staff, it’s safe to... read more