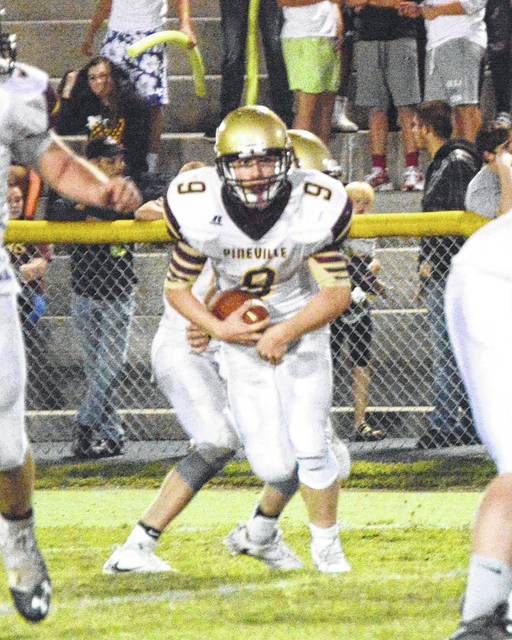 Matt Golden looks for a hole during Pineville’s game against Middlesboro last week. The Mountain Lions will look to get back in the win column on Friday when the team welcomes Cumberland Gap for homecoming.

Pineville set to take on CGHS on homecoming

While the Pineville offense found some success against Middlesboro a week ago, it wasn’t enough to prevent a 46-20 defeat at the hands of the Jackets. The loss is the Mountain Lions third of the season.

Matt Golden paced the team in their efforts against Middlesboro with 89 yards and two touchdowns on nine carries. Lawrence Simpson and Reese Capps finished with 34 and 29 yards, respectively.

Capps and Garland Ellis shared snaps at quarterback with Capps netting 55 yards on two completions and Ellis tallying 53 yards and a touchdown on five completions.

Friday night will be homecoming for Pineville when they welcome Cumberland Gap, Tennessee. The Lions have won the last two games against the Panthers and will look to earn a third this week.

The Panthers will be entering Friday’s game looking for both revenge and a chance to find the win column again. After starting the season with victories over Union County and Hancock County, Cumberland Gap has dropped a 42-6 loss to Meigs County and a 34-20 loss to Oneida.

Middlesboro falls 6-2 to the Lady Panthers

An injury-laden Middlesboro girls soccer team could not find a way to slow down Cumberland Gap, Tennessee on Tuesday. The... read more