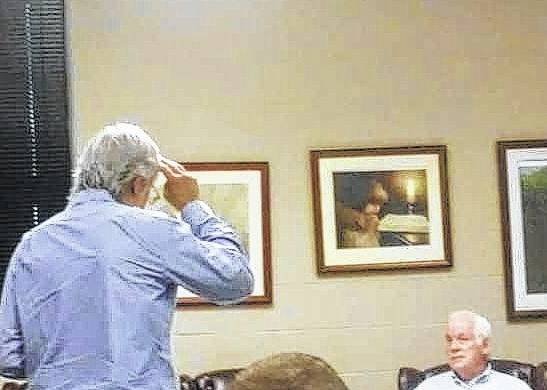 Bill Richardson presented his final floor plan of improvements to the board on Monday.

Pineville Independent Schools will soon undergo several changes in order to better the overall environment for both students and staff members.

The primary focus of Monday’s Pineville Board of Education meeting centered around the approval of architect Bill Richardson’s plans to implement various improvements in the construction of the district’s schools.

Richardson, owner of Richardson Associates Architects, presented to the board a finale floor plan of the improvements he plans to carry through with. The plan includes: a general reconstruction of locker rooms, a relocation of restrooms, an increased concession area, changes to the gym’s seating area, an installation of LED equipment, painting and roofing repairs, repairment of windows and an installation of high quality sound and video equipment.

One major focus of Richardson’s is to work on making high school games more enjoyable for handicapped fans. In order to do so, he plans to replace many balcony-level chairs with wheel chairs as well as provide a ramp leading up the bleachers.

While the ramp will be accessible to all, its primary purpose is to convenience those unable to easily — or at all — walk up the stairs, freeing them of any stress that may have once come from finding a seat or traveling to and from the concession stand, which Richardson also plans to make major changes to.

The concession area is to be greatly expanded in order to become what Richardson refers to as a “legitimate” serving stand. Along with this expansion, the serving counter used to prepare food will be extended into the lobby, complete with several new, useful resources for servers, including a small sink, counters, an ice machine and a refrigerator.

The total cost of the improvements averages at around $827,264, which remains within the board’s budget for the project. However, both Richardson and the board have taken into account that there’s always a chance the optimal bid could venture outside the limit. With that in mind, certain changes were labeled as “alternates” and are subject to change in such a scenario.

The board voted unanimously to approve the architectural content and many seem to be excited to see the improvements come to life.

“I think the plan looks great and I certainly appreciate all of the hard work Bill has put into it. I believe I speak for all of us when I see we’re all eager for the changes to occur,” said board member James Golden.

The board’s quick approval of the floor plan greatly contributed to the likelihood of meeting the improvements’ deal line. The plan will now soon be open to bidders, with enough time to receive the best bids possible.

Several other subjects were discussed at the meeting as well, including the attendance policy for school athletes and whether or not the rules currently in place are too strict. Football coach Bo Callebs presented the issue to the board, saying that the policy fails to take unavoidable situations into consideration.

While the policy couldn’t be changed in one day, the board has promised to take the issue into consideration and Golden expressed his sympathies for those negatively affected by the policy.

Besides the floor plan, all of the usual school board agenda was approved as well, including the 2017-2018 tax rates, working budget, finance report, and fundraiser and field trip requests.

Many upcoming events were announced, such as the regional KSPA meeting, the Winter Symposium and the Hall of Fame Induction. Anyone interested in attending any of these events should get in contact with Superintendent Russell Thompson.