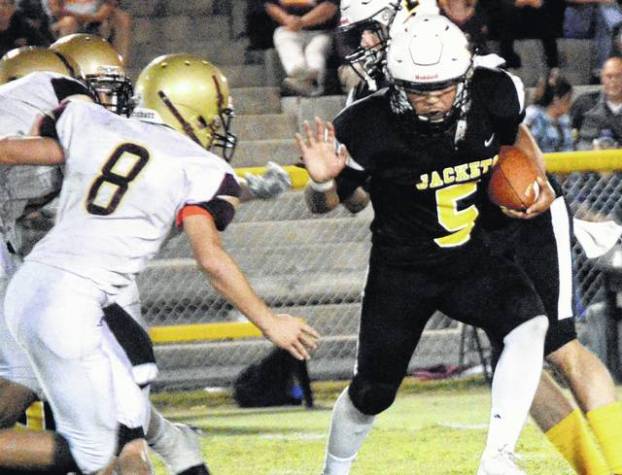 Michael Carroll throws a stiff arm during Middlesboro’s game against Pineville. This week, the Yellow Jackets travel to South Laurel while trying to keep their winning streak alive.

Middlesboro has been on a row as of late. After starting out the season with three losses, the Yellow Jackets picked up a victory over Harlan on Sept. 8. Last week, they earned a 46-20 win over Pineville giving Middlesboro their first multiple-win season since 2014.

On Friday, the Jackets will look to extend their winning streak to three games when they travel to South Laurel. Middlesboro hasn’t had much success the past two years when squaring against the Cardinals. Last year, the Jackets lost 46-8.

It was South Laurel’s rushing attack that doomed Middlesboro last season. The Cardinals racked up 336 yards on the ground with then-senior Matt Harp leading the way. On the opposite side of the field, the Jackets utilized the passing game to light a spark with the running attack being held in check.

The duo will try to boast the Jackets to their third win in a row giving the team momentum heading into a rough district slate.

South Laurel enters Friday’s game with a 2-2 record. They rebounded from a 36-12 opening season loss to North Laurel with a 42-6 victory over McCreary Central. A one-point loss to West Jessamine followed before a 34-12 victory over Leslie County two weeks ago.

Dual threat quarterback Adrian Fultz has been the catalyst for the Cardinal offense this season with the senior leading the team in both passing and rushing. Through the air, he has completed 53 percent of his passes for 908 yards and 10 touchdowns with three interceptions. On the ground, he has tallied 177 yards and four touchdowns on 41 carries.

Fultz’s two main targets in the passing game have been Matthew Dalton and Logan Madden. Dalton has hauled in 15 catches for 398 yards and six touchdowns. Madden has three touchdowns and 267 yards on 11 receptions.

Ace Allen and William Lanior are two other options for South Laurel in the running game. Allen has 138 yards and a touchdown on the year, while Lanior has averaged 36 yards per game and one touchdown.

Jacob Christensen and Allen lead the team defensively. Christensen has 43 tackles on the year. Allen has tallied 34. Eric Farris has the team’s only interception of the season.