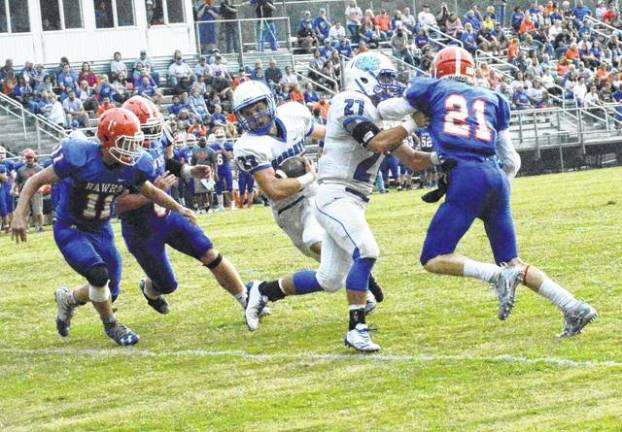 Colby Frazier follows a block by Jordan Wombles (27) during Bell County’s game against Pike County Central earlier in the season. The Bobcats open their district schedule on Friday when they travel to McCreary Central.

Bell County suffered their first loss of the new Dudley Hilton-era last week against a tough Whitley County team. The Bobcats got a taste of their own medicine with the Colonels dashing their way to 346 yards rushing in their 28-6 victory.

This week, the Bobcats will square off against an opponent that they have easily handled in the past. On Friday, Bell County travels to McCreary Central to open their district schedule.

While the two teams haven’t played in three years, their was a period of time that the Raiders and Bobcats played every season. Between 2007 and 2014, Bell and McCreary Central played in the same district when competing in both 4A and 3A.

Bell County had sustained success against the Raiders during that seven-year span and never won a game by less than double-digits. From 2007 to 2010, the Bobcats never allowed McCreary Central to score while also raking up a combined 251 points.

During the Wayne Mills years, the Bobcats continued their dominance. From 2011 to 2014, Bell County defeated the Raiders by an average of 51 points. The last time the two teams met was in 2014 when the Bobcats handed McCreary Central a 59-6 defeat.

To say that these two team will look completely different since the last time they went to battle would be an understatement. In those three years apart, the Raiders took time away from classification to help build the team with everything culminating with an 8-2 record last year. The Bobcats have went through their own ups-and-downs during that span.

On Friday, Bell County will look to get back on the winning track while McCreary Central hopes to keep its winning streak alive.

After getting off to a rocky start with back-to-back losses, McCreary Central has been able to when their last two games. On Sept. 8, the Raiders handed Fort Knox a 63-30 defeat. Last week, McCreary defeated 6A Paul Laurence Dunbar 22-21.

The Raiders have depended heavily on the rushing attack over the past few seasons. Brandon Troxell has been the go to running back since his sophomore year. The senior has continued to be the workhorse this year carrying the ball 93 times. He has tallied 701 yards and 12 touchdowns on the year.

The quarterbacks are not selfish with the ball. Six different receivers have multiple targets this year with Nathan Goins leading the way with 10 receptions for 150 yards. John Cash leads the team in touchdown receptions with two.

The McCreary Central defense has been susceptible to the run this season allowing 830 yards on the ground. Through the air, the Raiders have allowed 507 yards.

Nathan Prosser leads the team in tackles with 38.

Pineville set to take on CGHS on homecoming

While the Pineville offense found some success against Middlesboro a week ago, it wasn’t enough to prevent a 46-20 defeat... read more