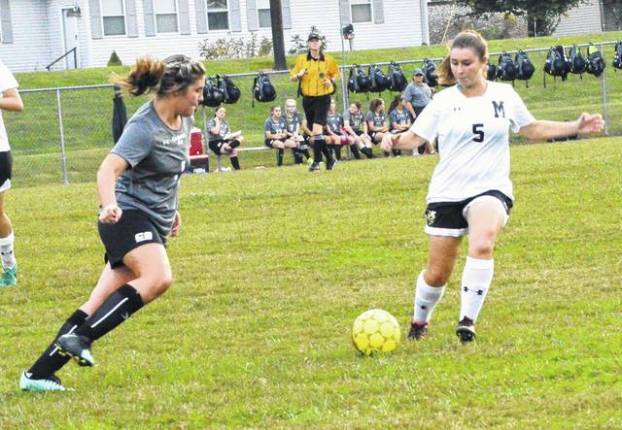 Middlesboro falls 6-2 to the Lady Panthers

An injury-laden Middlesboro girls soccer team could not find a way to slow down Cumberland Gap, Tennessee on Tuesday. The Lady Panthers controlled possession en route to a 6-2 victory.

The Lady Jackets entered the game without leading scorer and team captain Aubrey Sowders — who is likely going to miss the rest of the season according to Middlesboro coach Quinton Mason. The team was also without forward Tiffany Thomas.

With that, Mason said the team just kept fighting.

“We fought for the most part, but it’s hard to fight when your captain is gone and your starting left forward is out. It’s just hard when you only have a couple of subs too,” said Mason. “My girls fight. They don’t quit until it’s done. I had some girls out of position today because that’s where I needed them. It’s hard to teach on the run. I’m proud of them. I’m always proud of them.”

Middlesboro’s two goals came near the end of both periods. At the end of the first period, Baylee Woody received a cross from Emily Barnwell and kick the ball over the keeper into the corner of the far post.

“Baylee made a heck of shot. It was a thing of beauty,” said Mason. “The cross was good and then the shot was just beautiful.”

The second goal came on a penalty kick from Barnwell moments before the final whistle blew. The two goals give both Barnwell and Woody seven goals on the season.

The loss gives Middlesboro its third since defeating Knox Central on Sept. 12. Just a day prior to Tuesday’s game, the Lady Jackets traveled to play rival Harlan County. They battled the Lady Black Bears but came up short in a 4-3 defeat.

“We had two penalties in the box that ended up costing us the game because they made both (penalty kicks) and the score was 4-3,” said Mason about the team’s game against Harlan County. “If we don’t make those penalties in the box, we win and that puts us in first place in the district.

“These are still 16-, 17-year old girls. They’re not perfect,” said Mason. “I have no complaints. They play hard. They play iron man soccer. I got 12 or 13 girls and they are all playing the whole game. That’s hard in soccer.”

Barnwell paced Middlesboro during Monday’s game against Harlan County with two goals. Sowders scored one goal, while Woody was credited with one assist.

Photos by Anthony Cloud | Daily News Garland Ellis rolls out of the pocket and looks down the field for... read more