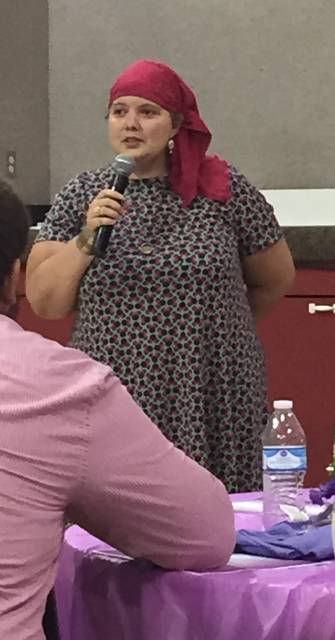 Jamie Vanover-Fischer was the keynote speaker at this year’s Survivor’s Dinner, held just prior to the annual Claiborne County Relay For Life. The Relay event is scheduled for this evening at Harrogate City Park.

‘What cancer has taught me’

Recently, a room full of cancer survivors gathered to celebrate that title during the annual Survivor’s Dinner that is held prior to the Claiborne County Relay For Life. This year’s dinner, held at Pump Springs Baptist Church in Harrogate, Tennessee, was a celebration of life and love, with music by Station Creek and a keynote speech by Jamie Vanover-Fischer.

The fact that Fischer was even at the dinner was in itself a miracle — something she has acknowledged.

She told the crowd that at the time of her diagnosis in January doctors didn’t give her much hope. What started as breast cancer had metastasized to almost all of her organs, her spine and her bones. There was hardly any part of her body that wasn’t affected, she said.

As the mother of two, a wife, teacher, Girl Scout leader, daughter, sister and much more, she began her journey to beat the cancer that was an immediate threat to her life.

“I spent a lot of time in the beginning thinking about what I had lost or may lose,” she said, “my hair, organs, strength, ability to walk, memory, pride, family time, long trips….basically my whole life has changed in the last eight months.”

Fischer has made her fight public and has garnered a tremendous amount of support from not only the Tri-State area, but from around the country. She has a Facebook page dedicated to her fight, titled Jamie’s Journey.

After taking some time thinking about what she would lose, she decided to flip it around and think positively.

She talked about “what cancer has taught me.” She told the crowd the following:

• “God is always there whether we see him or not. He leads me, guides me, and even follows me when I don’t take his route. My oncologists said a few weeks, I asked when I could work. I’ve pushed and I’ve went when no one thought it was a good idea but God he’s been right there.”

• “Faith is a powerful thing — the first piece of mail I ever got was a necklace with a verse and a mustard seed. I thought, oh I’ve got faith, I’ve always had faith…but when I woke up and didn’t wanna get up…when I didn’t want any more treatment…I got faith that God would move that mountain.”

• “We live in an amazing community. In the almost 30 years I’ve lived here, I’ve heard drugs, alcohol, addiction. I’ve heard people don’t care about others. No one works together. We’ve got hungry kids that leave our schools every day.” She then went on to talk about the food, cards, gifts and other things that she and her family have received as well as the numerous fundraisers that have been held.

• “We are so much stronger than we even know. Things you think are impossible and you could never do are sometimes the easiest and the best.”

•God has a big plan and a purpose for us all! Everything that cancer has taken from me God has provided me with something else. Even though I can’t see the big picture I know God has one!”

Fischer is determined to continue the fight and can be seen at Heritage Christian Academy, at Girl Scouts, at church and other activities. She plans to attend the Claiborne County Relay For Life.

The Relay For Life will be held Sept. 15 at Harrogate City Park. The event will begin at 7 p.m., with speakers, survivor recognition medal ceremony, a special lap for survivors and entertainment throughout the evening. Teams will be set up around the perimeter of the park raising funds for the fight against cancer. Missy Essary of Tazewell, Tennessee, is slated to be the keynote speaker for Friday’s event.