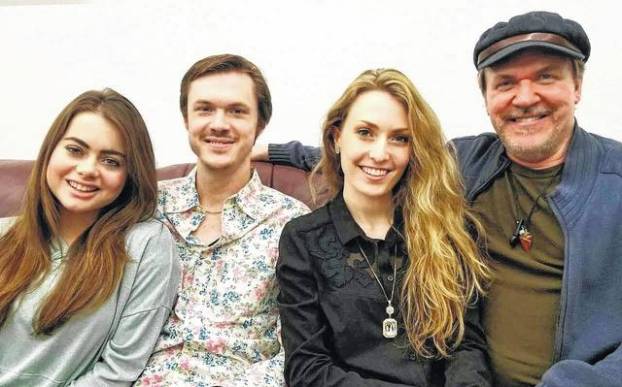 The four main members of the acclaimed and award winning O’Connor Band sat in a semi-circle, looking comfortable and genuinely interested in answering questions. It soon became apparent that this is a band with deep, rich love and understanding for music.

The band’s patriarch, Mark O’Connor, is a humble and thoughtful man and does not exude the kind of clichéd presence some might prematurely assume a star of his stature may possess.

He has had a long and storied career in the music industry as a fiddler and violinist, creating jazz, bluegrass and Americana music. He’s released dozens of albums, all consisting mostly of his own original compositions and he has worked with some of the industry’s best talent. He had garnered critical acclaim and commercial success for his craft.

Now, O’Connor leads the acclaimed O’Connor Band, consisting of his son, Forrest, his daughter-in-law Kate and his wife Maggie.

When asked whose idea it was to start a band made up of mostly family, Mark stated “I saw Forrest and Kate start to work together as a duo and at the same time Maggie and I started playing a lot of fiddle duos and I liked the way everyone played and sang so I hired everyone for my Christmas tour three years ago. I think that’s what kind of gave us the idea to try and take this on the road beyond Christmas time. We all played and sang together really well, and there was obviously a chemistry being O’Connor’s…and a connection that was very special.”

Mark doesn’t believe in the old adage of not working with family.

“Some people say that…but, you know, nothing has to last forever. If it didn’t work out, it was worth a try…we don’t to ignore something that was so obvious to do,” he said.

On the topic of the fast rise to fame The O’Connor Band has received in only two short years, Mark is both surprised and not surprised.

“I think the changing music industry always keeps you on your toes to see where you should be playing and what you should be concentrating on. We started our group with the idea that we were going to be a recording band first…after a couple records we find that perhaps our strength right now is our stage performances. People really love that, and that’s a good development because the record music industry is suffering some anyway, so being able to put on really good stage performances is really lucky for us and helped us a lot,” he said.

Despite growing up with a career musician for a father, Forrest wasn’t sure that music was going to be his calling until his college years.

“I was pretty into school work growing up, the whole academic thing. I don’t think that I got sick of it ever (music) so it wasn’t one of those things where I wanted to do something different because I’d been around it too much. I was kind of a late bloomer playing and I tried a couple instruments and wasn’t that good, so I didn’t think about it that much until I picked up the mandolin,” he said.

Kate O’Connor didn’t grow up with a musician family, but her family did love music.

“I grew up in a band and started playing fiddle when I was nine and started singing and writing soon after…I knew from a very young age that music is what I wanted to do,” she said.

While attending college in Nashville, Kate met Forrest through a producer who said the two of them would make a good match, musically. From there they fell in love and got married.

Maggie O’Connor knew she would always play music because she grew up with musicians as parents.

“I was immediately in a family band before I even knew how to play the violin. I knew I was going to be in this family band situation with my brother and dad, and I had to pick an instrument. So I chose the violin…I really started to get serious about music in high school…I couldn’t imagine life any other way, playing music for people and I ended up meeting my husband through the violin as well. You can travel all around the world and play music for people and they get to know you just by listening to you. It’s a unique way of sharing a piece of yourself with the word,” she said.

When discussing what it’s like performing with his family and putting on a good show, Mark stated

“For me it means everything. The communicative part of performing and music is the very special part…it’s only special in that you know one day you’ll be able to take the stage again and be able to hopefully move an audience, put a smile on their face or take them down an emotional journey they wouldn’t have otherwise experienced that day…it’s a way to bring all the six of us (the other two members of the band) together,” he said.

On what advice to give to aspiring musicians, Maggie said “The world needs music right now! It’s an important job. Keep playing the music for people and keep making us happy!”

Mark stated he felt that in a way, music is like a public service.

“We have to go out there and do the best we can for our community, for our fellow citizens,” he said.