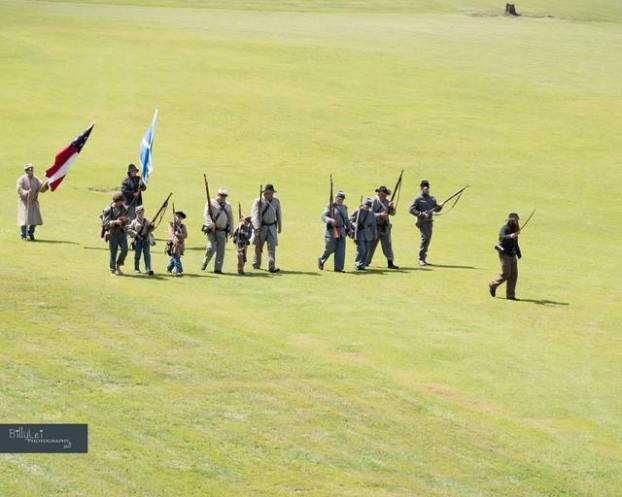 Several reenactors hit the field to bring the event to life.

The significant role played by the Pineville area during one of the darkest — yet most historical — eras the nation has endured was finally put on full display during the very first “Battle of the Narrows” Civil War reenactment last Saturday.

The event, hosted by Pine Mountain State Resort Park, focused on the historical events of the war and the connections the area had to such events — a fact many claimed to have been unaware of before attending the show.

The reenactment took place at the Wasioto Winds Golf Course, which has been confirmed by recent archaeological digs to have had quite a noteworthy influence on the war. Toward the back of the course, the land was once the home to Civil War military presence, as well as a Native American burial mound. The northern end had served as a holding place for both United States and Confederate States to set up fortifications.

Taking the stage (or field) as reenactors, several members of Battery “M” 4th U.S. Artillery gladly traveled from various locations to participate in the event.

“Our interaction with Pine Mountain State Resort Park Ranger Keith Bowling and others was one of the best experiences we’ve ever had at a reenactment. The amenities outweighed any experience we have ever had,” said Kevin Combs, member of the Battery M 4th U.S. Artillery.

The park was filled with over 100 visitors from all across the region eager to watch the reenactment come to life on the field. However, before the battles could begin, the audience was first informed of basic — and even some not so basic — knowledge of the Civil War and the effects it had on the area. In order to provide the audience with such information, Dr. Lucas Walker from Cumberland Gap National Historical Park volunteered to give a speech toward the beginning of the show.

Then — viewing from the golf course’s Pro Shop balcony — the audience was given a reenactment like no other; one that had never before been presented. They were given the opportunity to witness historically accurate, realistic representations of battles and events that once occurred on the same grounds many of them walk on regularly.

The park plans to continue hosting the reenactment for many years to come, especially after the audience made it known that they would happily return and support the event. However, plans to take it a step further next year have already begun. Along with adding an extra day to the event, nearby schools will be welcome to attend as a learning-oriented field trip, seeing as students should be educated on the immense history that was made in (or near) their own home town.

“For a first year event we are really happy with how it turned out. We believe it has the potential to become something people look forward to year after year,” said Bowling. “The showmanship and professionalism of our reenactors was phenomenal and we cannot thank them enough for all of their hard work and the great show they put on. We appreciate everyone coming out to make the event a huge success.”

Bowling also mentioned that they are currently searching for professional educators who would be willing to volunteer to help teach the history of the Civil War to students at next year’s reenactment, alongside members of Battery M 4th U.S. Artillery.