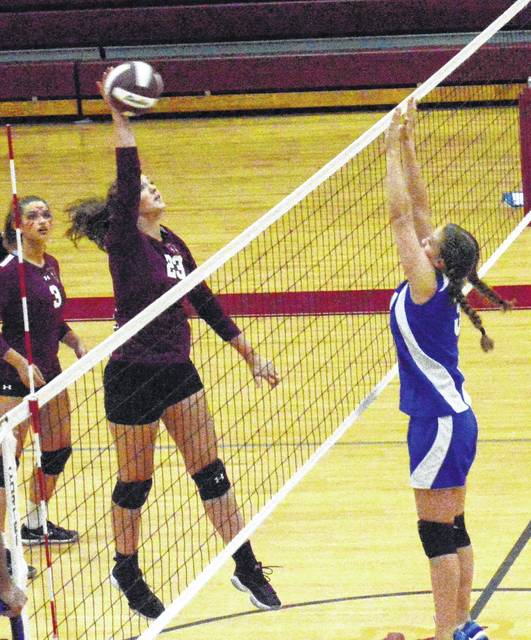 Jill Enix gets a kill during Pineville’s game against OBI on Thursday. After a strong start, the Lady Lions lost 3-2 to the Lady Mountaineers. Pineville returns to action on Saturday when they go up against Middlesboro.

Pineville lets one get away

The Pineville volleyball team watched as their two-set lead slowly began to dwindle. After a strong start, a sluggish third set for the Lady Lions gave Oneida Baptist Institute the momentum they needed. The visiting Lady Mountaineers won the final three sets to earn a 3-2 victory over Pineville.

“We have this nasty habit of playing…slot ball, and we don’t play our bumps that kill which is what we’re good at,” said Pineville coach Samantha North. “We have girls that can really kill the ball, but as soon as we revert to trying to get it over any way possible…that starts to fall apart.

“We played really strong the first two sets. We played our game. Then we started playing (OBI’s) game, and we can’t beat them at their game.”

The loss ended a three-game winning streak for the Lady Lions that saw the team beat Barbourville twice and Bell County. OBI extends its current winnings streak to four games.

Pineville held a 17-13 lead midway through the first set. After the Lady Mountaineers scored on an attacking error, Pineville scored back-to-back points to improve their lead to 19-14.

OBI closed the gap to as little as 21-18 before the Lady Lions scored four straight points to earn the 25-18 set victory.

Pineville got off to a strong start in the second set after taking advantage of some attacking errors mixed with a kill from Makenzie Fuson to take a 3-0 lead. The Lady Lions tacked on two more points after consecutive points from OBI to give them a 5-2 lead.

The Lady Mountaineers continued to stay within reaching distance through the midway point of the set. A kill by Sarah Combs and two aces by Marissa Ferguson gave Pineville a 12-7 lead. The rally was cut short by OBI to narrow the deficit to 12-8.

The Lady Lions went on another short, three-point rally later in the set to increase the lead to 16-9 before consecutive points from OBI brought the score to 21-15. Pineville went on to win the set 25-18 to claim a two-set lead.

Things began to fall apart for Pineville from there.

OBI took a 6-0 lead in the third set behind the serve of Leighann Truesdale. A kill by Fuson ended the run and narrowed the deficit to 6-1. The Lady Mountaineers went on another run to build the lead to 10-1.

Pineville could never find momentum to rally back in the set. The Lady Mountaineers went on to win the set 25-11.

The Lady Lions came within a couple of points of ending the game in the fourth set. Both teams had their moments during the set. Short rallies by OBI allowed the team to keep the lead.

Pineville made a push for the lead near the end of the set. After falling behind 24-19, consecutive points by Fuson and a kill by Jill Enix cut the lead to 24-22. Another point by Pineville brought the score to 24-23.

The Lady Lions never found their step in the fifth set. OBI turned a 10-0 start to a 15-6 set victory to claim the 3-2 win over Pineville.