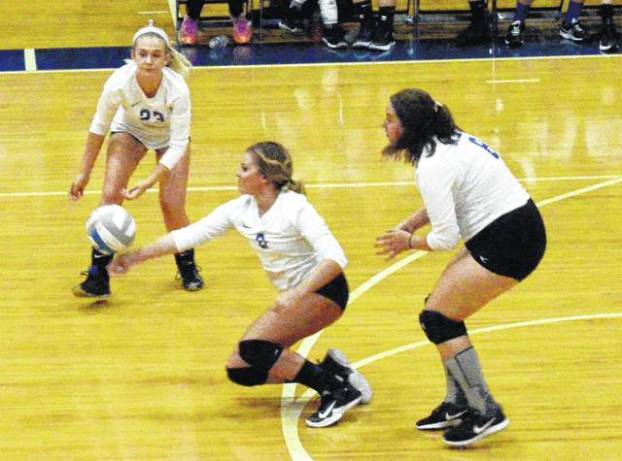 Madison Mason gets a dig to keep the volley alive during Bell County’s game against Williamsburg on Monday. The Lady Cats lost to Williamsburg in three sets. Bell returned to action on Tuesday against McCreary Central.

It was short lulls defensively that hurt Bell County on Monday when Williamsburg visited Log Mountain. The Lady Jackets used short bursts of offense in each set during their 3-0 victory over the Lady Cats.

Bell County drops its seventh straight game after their three-set victory over Barbourville earlier in the year. The win gives Williamsburg its second straight after picking up a victory over Middlesboro last week.

The Lady Cats were always a short run away from claiming victory in each set. The Lady Jackets rallied at the end of the first two sets to claim a 2-0 lead before grabbing an early lead in the third set to clinch the victory.

Williamsburg jumped out to a 5-3 lead early in the first set. A service error and a kill by Calie Pannell gave Bell a 4-3 lead. After the Lady Jackets tied the game at 5-5, consecutive kills by Emily Pendleton gave the Lady Cats a 7-5 lead.

A service error broke the rally momentarily before a kill and an ace from Raegan Robbins increased the Bell lead to 10-6. The Lady Jackets rallied back with six consecutive points to claim a 12-10 lead.

A Madison Mason kill brought Bell County within one point. The two teams battled back and forth throughout the remainder of the set with three straight aces by Pannell giving the Lady Cats a 20-19 lead.

The two teams battled to a 25-25 tie before back-to-back points by Williamsburg clinched a 27-25 set victory for the Lady Jackets.

Bell County jumped out to a 5-2 lead in the second set behind an ace by Samantha King and a kill by Pendleton. The Lady Jackets battled back to tie the game at 5-5 before another Pendleton kill gave the Lady Cats a 6-5 lead.

Williamsburg stayed within reaching distance before finally grabbing the lead midway through the set.

A kill by Pendleton that brought the score to 17-16 in favor of Williamsburg would be as close as Bell would come to reclaiming the lead.The Lady Jackets outscored the Lady Cats 8-4 down the stretch to earn a 25-20 set victory and a two-match lead.

Williamsburg was able to walk away with the three-set victory after grabbing a 25-20 victory in the third set.