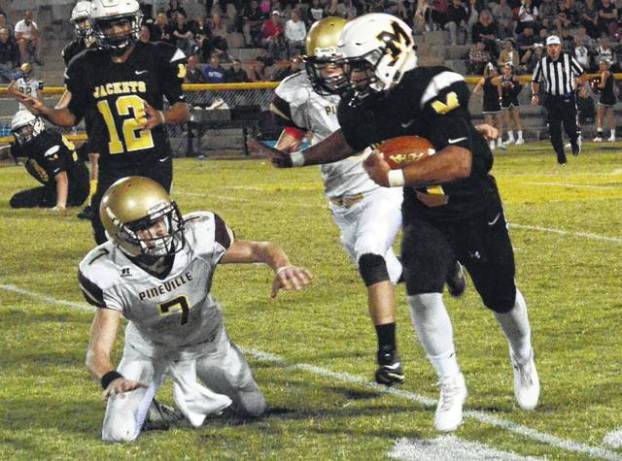 Michael Carroll finished with 290 yards and five touchdown on 13 carries during Friday’s game against Pineville. Middlesboro defeated the Mountain Lions 46-20 to earn their second win of the season.

One touchdown after the next, the announcer called Michael Carroll’s name over the loud speaker. The senior running back had a break out game against Pineville on Friday tallying five touchdowns in Middlesboro’s 46-20 victory over the Mountain Lions.

For Middlesboro, it’s the first time the team has picked up multiple wins in a season since 2014. Pineville drops to 2-3 on the season.

“It’s huge. It’s amazing what a win will do,” said Middlesboro coach Zach Massengill about the team’s rising confidence. “The kids are starting to understand that we’re going up, we’re getting better and we’re fixing mistakes throughout the week. We’re attacking practice the right way. If we will continue to get better each week, that’s all I’m asking for. I think they’ll see good results.”

“We really bragged on the offensive line. They really created some nice running lanes,” said Massengill. “We’re just getting better. We’re getting better offensively. The backs are starting to show their strength.

“Michael (Carroll) had a standout game tonight. They all had good games, but tonight was Michael’s turn. He took it and ran with it and secured the ball. I couldn’t be more happier for that kid. He’s had a run of bad luck for two years with bad injuries and battled back. I’m just really proud of him.”

Defensively, Middlesboro’s defensive backs kept the passing game in check. Alex Mason and Hariston both came up with interceptions, and Eric Helton got his hands on three but couldn’t haul them in.

The defensive ends and linebackers were able to contain much of the jet sweeps that have been successful for Pineville over the past few weeks.

“We’re getting better. We still got a ways to go,” said Massengill. “Pineville’s got a nice running game. We knew that coming in. They’re putting up huge number. We were really focused on stopping the run.

“They hurt us with the pass a little bit, but they have some nice backs that can do some really nice things. I thought our edge players played pretty consistent tonight and was able to force the ball back in, and then we were able to make some plays.”

Pineville was led offensively by Matt Golden. The shifty back tallied 83 yards and two touchdowns on 10 carries. Lawrence Simpson finished the game with 50 yards on 11 carries, while Reese Capps ended with 40 yards on 16 carries.

Both Capps and Garland Ellis saw action at quarterback. Capps went 2-for-5 for 56 yards and an interception. Ellis completed six of his passes for 76 yards and a touchdown. Josh Lawson hauled in three passes for 67 yards.

Simpson hauled in the night’s only touchdown pass on a 23-yard reception.

“We knew we had our hands full. Everybody’s been down playing Middlesboro. After we watched film, they’re a good football team,” said Pineville coach Bart Elam about Middlesboro. “They do a good job. They’ve got a couple of really good backs. They’ve got a good offensive scheme for their personnel, but the bottom line is they got athletes in a lot of places.

“They did a good job against us. We were able to do some things offensively, but we weren’t able to pick up those third-and-shorts. We were able to get to third-and-manageable down and distance, but…Sebastian (Wagoner) kept running through lanes on third down and we weren’t quick enough to step over and pick him up. (Middlesboro) did well.”

An interception by Hariston on Pineville’s opening drive helped set up Middlesboro’s first touchdown. After taking over possession at the Mountain Lion 30, a 12-yard run by Hariston moved the ball down to the 18-yard line.

Two plays later, Carroll punched the ball into the end zone from 15 yards out. Brandon Helton’s extra point gave the Jackets a 7-0 lead with 6:00 left in the first quarter.

Pineville moved inside Middlesboro territory on the ensuing drive behind the efforts of Golden and Capps. An 8-yard loss on third-and-11 forced the Lions to punt the ball away.

It took Middlesboro just to plays to find pay dirt. On second down, Carroll found space and raced 80 yards down the field for a touchdown. The Helton PAT increased the lead to 21-0 with 5:33 remaining in the half.

The Mountain Lions were in prime position to score on the ensuing drive. Sean Whitehead returned the short kick off to the Middlesboro 32. A 15-yard run by Simpson and a 2-yard run by Capps moved Pineville down to the 15-yard line.

A 6-yard gain by Golden pushed the ball down to the Jacket 9 before a Simpson fumble was recovered by Nathan Hughett. Two plays later, Carroll broke free on a 79-yard touchdown with 3:03 remaining in the second to widen the margin to 28-0.

Pineville put points on the scoreboard on their next drive. After taking over on their own 17, the Lions marched 83 yards in seven plays. Golden capped the drive by running through several tackles for a 17-yard touchdown. The Lions failed on the two-point attempt to cut the lead to 28-6 with 55.2 seconds remaining in the half.

Middlesboro responded quickly on the ensuing drive. Just two plays in, Carroll found pay dirt again on a 42-yard touchdown run that sent the Jackets into halftime with a 34-6 lead.

Neither team would score again until late in the third quarter. A four-play drive for Middlesboro ended with a 57-yard touchdown run by Hariston that ballooned the lead to 40-6.

On the next drive, Mason intercepted the Ellis pass to give the Jackets possession again. Two plays later, McWilliams scored on a 12-yard run that increased the lead to 46-6 with 3:15 remaining in the third.

The Mountain Lions added two touchdowns in the fourth quarter. On the opening drive of the quarter, Pineville went 60 yards in nine plays. Golden finished the drive with a 30-yard touchdown run with 6:01 remaining in the game. Ellis connected with Capps on the two-point conversion to narrow the lead to 46-14.

After recovering the onside kick, Pineville went 58 yards in five plays with Ellis connecting with Simpson on a 32-yard touchdown pass as time expired. The Jackets walked away with the 26-point win.